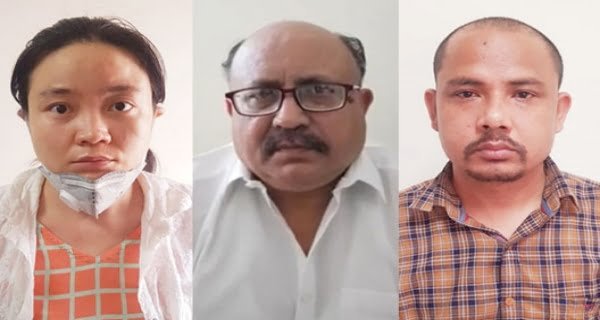 New Delhi: On Saturday, a special cell of Delhi Police arrested a journalist on charges of spying for China. The accused journalist named is Rajeev Sharma. He was arrested under the Official Secrets Act for giving sensitive information to the Chinese intelligence agency. A Chinese woman King Xi and Nepalese citizen Sher Singh were also arrested.

According to information received, the police has obtained several intelligence documents of the Indian Army from the accused. In the interrogation, the journalist has confessed to spying on the Chinese intelligence agency. After arrest, the accused was brought to court, where he has been sent for six days remand.

According to the intelligence agency, Rajiv Sharma, who lives in the St. Xavier apartment in Pitampura, New Delhi, had links with foreign intelligence officials and illegally obtained money from his handler in exchange for intelligence. Due to this, Rajiv Sharma was also arrested on 14 September and Delhi Police also obtained a warrant to search his residential premises.

On this, Special Cell DCP Sanjeev Yadav gave detailed information to the media that during interrogation, Rajiv Sharma has admitted his involvement in the purchase of secret and sensitive information. He also told that Sharma also interacted with his Chinese handlers Michael and George based in Kunming through separate digital channels. Rajiv Sharma said that he was going to send secret documents to their operators soon.

It has also been told that during 2010-2014, Rajiv Sharma used to write a weekly column for the Chinese government mouthpiece ‘Global Times’ and due to this column, Chinese intelligence agent Michael told Rajiv Sharma through his LinkedIn account. Had contacted. Michael then invited him to Kunming (China) for an interview with the media company. Whose expense was borne by Michael. At this meeting, Rajiv Sharma and Michael and his junior Shou had confirmed that Rajiv would give them input on various aspects of India-China relations.

According to the information, Rajiv Sharma was in constant contact between Michael and Shou even between 2016 and 2018. He was assigned the dangerous but necessary task of providing information on the deployment of Indian troops at the Bhutan-Sikkim-China tri-junction including Doklam, the pattern of Indo-Myanmar military cooperation and the India-China border issue. It has also been reported that Rajiv Sharma once held his meeting with Michael and Shau in Laos and Maldives and gave them the necessary information. Rajiv was also associated with these people through e-mail and social media.

Subsequently, in January 2019, Rajiv Sharma joined George, another Kunming based Chinese man. He met George by going to Kunming via Kathmandu. It is being said that George described himself as the general manager of a Chinese media company and asked Rajiv Sharma to write a report on issues related to the Dalai Lama.

In return for all this Rajiv was offered US $ 500 per article. At the same time, George asked Sharma to send money through a company based in Delhi’s Mahipalpur, which is run by a Chinese woman King who has just been arrested along with Rajiv Sharma. According to the intelligence agency, Rajiv Sharma received Rs 30 lakh from George in about 10 installments between January 2019 and September 2020, in lieu of important information. It is also reported that Rajiv had met Malaysia and Kunming George several times after this. Till now, the investigation on Rajiv Sharma and his Chinese relations is going on till the news is written.

11/11/2020
Beijing: Chinese President Xi Jinping said on Tuesday that China cannot be separated from the world in achieving development. He especially highlighted the new...

‘Madam Chief Minister’ at the box office, ‘The White Tiger’ on Netflix, these films...

22/01/2021
Mumbai: This Friday is proving to be a film for cinema lovers. Today, where the second film is going to be released at the...

01/08/2020
Nagpur: Five workers were killed when a boiler exploded at a sugar factory in Nagpur district of Maharashtra on Saturday afternoon. The accident took...

18/08/2020
Washington: The Trump Administration has increased the toughness of the technology company of China (Huawei). The administration is taking steps that do not allow...