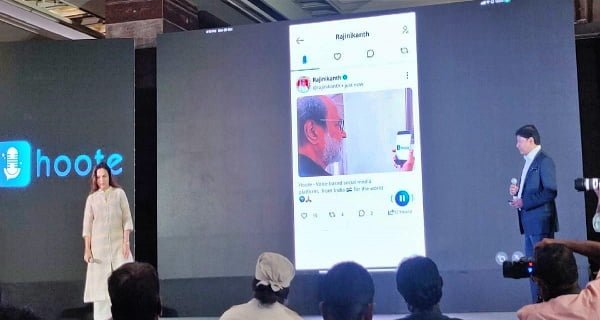 Rajinikanth said that people will now be able to express their thoughts and wishes through their voices. Just like he writes in the language of his choice. The superstar’s daughter Soundarya while talking to NDTV said that the future of social media is the voice and I believe very strongly in this thing. Soundarya said that on Hoote people can express their thoughts and feelings in any language from anywhere at any time.

What’s special about this app
There is support for eight languages ​​with Hoote, which includes both Indian and foreign. Tamil, Hindi, Telugu, Marathi, Malayalam, Kannada, Bengali, and Gujarati are supported as Indian languages ​​in Hoote. Hoote has been designed in such a way that users will be able to send messages by speaking without typing anything. This means that Hoote is a voice note app. Once the voice note is recorded, users will be able to add music and pictures as per their choice.

The Hoote app can be downloaded for free from the Google Play Store. You have to register before using the app. In the app, users will be able to follow celebrities like Rajinikanth, Gautam Gambhir, news channels, politicians. The voice note present in the app can be played and paused easily. In this, options like Like, Re-post, and Re-share will be available.

Users of Hoote app will be able to record a maximum of 60 seconds of voice notes. Captions, background music, and images can be added after recording. For music, options like Emotion, Environmental, Nature, Religious and Native will be available. There is also an option to turn off comments in the Hoote app. A maximum 120 words option will be available for a caption.

02/08/2020/10:59:pm
New Delhi: The Central Government has written to all states and Union Territories asking that smartphones and tablet devices should be allowed for hospitalized...

10/01/2022/9:06:pm
New Delhi: The havoc of Coronavirus continues in Delhi, the capital of the country. Delhi Police officers and policemen are constantly coming in the...

01/04/2021/9:25:pm
​​Gautam Budh Nagar: A 15-year-old teenager allegedly committed suicide by jumping from an under-construction building after refusing to play 'online games' over the phone...