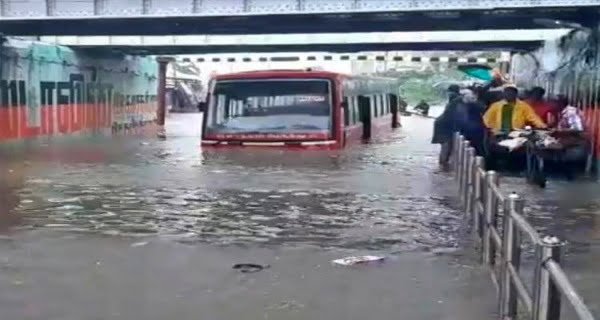 Chennai: On Friday, 5 people died due to heavy rain in Tamil Nadu. The death toll in the state has risen to 68 due to the rains. Meanwhile, the Meteorological Department (IMD) has warned of more rains in South India till December 2. According to the English newspaper Hindustan Times, since November 1, 172 people have died in five southern states, of which Tamil Nadu is the highest. After this, 48 ​​people have died in Kerala, 44 in Andhra Pradesh, and 12 in Karnataka.

According to the Meteorological Department (IMD), it is raining continuously due to the cyclonic circulation over the Bay of Bengal off the Sri Lankan coast. It is about 1.5 kilometers above sea level. At the same time, a new low-pressure area is very likely to form over South Andaman Sea around 28 November 2021 and move west-northwestwards and possibly further as a depression over the south-central Bay of Bengal on 29 November. likely to increase.

More rain than expected
IMD’s rainfall data released on Friday said that between November 1 and November 25, 143.4% excess rainfall was recorded in south peninsular India. In which Karnataka and Kerala received more than 110 percent of the normal rainfall. Tamil Nadu, which generally receives less rainfall this season than states on the west coast, has recorded 70% more rainfall during the northeast monsoon, which began on October 1.

IMD’s red alert for 18 districts
The IMD has issued a red alert for 18 districts in the entire coastal region of Tamil Nadu on Friday and an orange alert for the districts adjoining the coastal areas. On the previous day, 37 out of 38 districts of the state have received heavy rains, and schools and colleges remained closed in most places. State Revenue and Disaster Minister K. Ramachandran said five people died in Ariyalur, Dindigul, Sivaganga, and Tiruvannammali due to the rain. He said that 10,503 people have been shifted to government relief camps.

Meanwhile, the situation returned to normal on Friday after several days of torrential rains in the South Coastal and Rayalaseema districts of Andhra Pradesh. But moderate rains were reported from many areas and the IMD had predicted more rain in the region till December 2.

Booking of Kia Carens car starts from today, great features will be available

Elon Musk’s Starlink satellite gets a shock in India, will have to pay...

01/04/2021/9:25:pm
​​Gautam Budh Nagar: A 15-year-old teenager allegedly committed suicide by jumping from an under-construction building after refusing to play 'online games' over the phone...