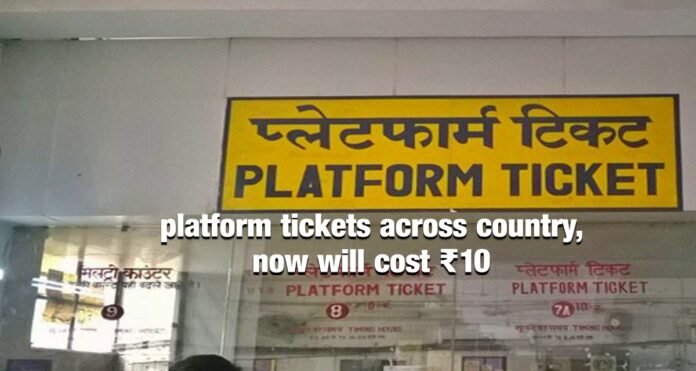 Central Railway on Wednesday slashed platform ticket prices at Chhatrapati Shivaji Maharaj Terminus (CSMT), Dadar, Lokmanya Tilak Terminus (LTT), Thane, Kalyan, and Panvel stations as an easing of Covid restrictions. given. According to the notification of the Central Railway, ‘In view of the relaxation of restrictions imposed due to the Covid-19 epidemic, the price of platform tickets at CSMT, Dadar, LTT, Thane, Kalyan and Panvel stations has been reduced from Rs 50 to Rs 10 back by the competent authority. The decision has been taken.’

No food will be served on railways
Last Friday, the Railways announced that they would resume serving cooked food in trains. This service was discontinued due to the coronavirus pandemic. The Railway Board, in a letter, had asked the Indian Railway Catering and Tourism Corporation (IRCTC) to resume serving cooked meals to passengers in trains to restore normal train services.

It was said that now the lockdown restrictions affected by the epidemic have been relaxed. It is expected that with this arrangement, passengers will start getting the facility as before. The passengers were facing problems due to the non-serving of food during the pandemic.

Meanwhile, the Central Railway has said that suburban train passengers who have received both doses of the anti-Covid vaccine can now book single journey and season tickets on their mobile phones through the Unreserved Ticketing System (UTS) app of the Railways. This app has been linked to the universal pass system of the state government.

The man hit the mosque gate of Mecca Medina with a speeding car, see...

Now, this bank has given festival gifts to the customers! You will get loan...

Attention! The disappearance of 10 passengers who came to Bangalore from African countries caused...