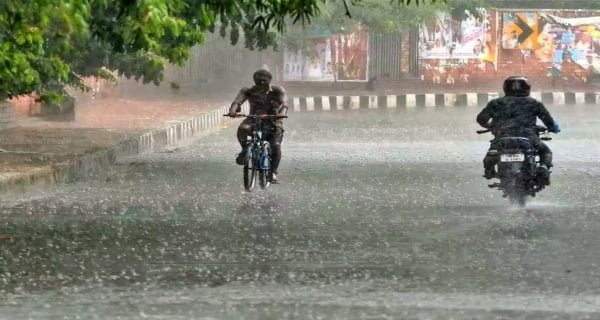 New Delhi: Heavy rain in the eastern part of Rajasthan flooded the roads and washed away railway tracks in the Jodhpur division. While the neighboring states also received light and moderate rains, parts of north and central India are expected to receive heavy rains in the next four days. The India Meteorological Department (IMD) has issued a ‘red alert’ for parts of Rajasthan and Madhya Pradesh. At the same time, between August 1 to 2, there may be very heavy rain at isolated places with rain in western Uttar Pradesh.

The Meteorological Department in Delhi said that the maximum temperature was recorded at 34.4 degrees Celsius. According to the department, the city received an average of 43.6 mm of rain till 8.30 am. On the other hand, a portion of the road under the IIT-Delhi flyover collapsed due to heavy rains in the past few days, affecting traffic in the area on Saturday.

At the same time, relief news has also come out that the water level of Yamuna reached below the danger mark of 205.33 on Saturday morning. A day earlier in Delhi, the administration had issued an alert for floods. The department has issued a ‘Yellow’ alert for Sunday and again an ‘Orange’ alert for Monday.

With Monsoon becoming active in Uttar Pradesh, light to moderate rain and thundershower occurred at many places over East Uttar Pradesh and at most places in West Uttar Pradesh. The Meteorological Department issued a statement and informed about this. In a release issued here on Saturday, the Meteorological Department said that there was heavy rain at some places in the state and scattered thunderstorms occurred at isolated places. It said that Chitrakoot, Etawah, Etah, Auraiya, Firozabad, Sonbhadra, Agra, and Lalitpur districts recorded rain.

According to the Meteorological Department in Rajasthan, the Jaipur-Jodhpur railway track was washed away due to continuous water flow between Gudha and Gaonidi Marwar Junction in Nagaur district on Saturday, affecting the movement of trains for a few hours. A North Western Railway spokesperson said the track was restored after a few hours.

According to the Meteorological Department, during the last 24 hours, heavy to very heavy rains were recorded at isolated places in Nagaur, Baran, Jaipur, Sawaimodhapur, Karauli, Sikar, Alwar, Jhunjhunu, and Churu districts. The highest rainfall in East Rajasthan was recorded in Shahbad of Baran with 304 mm and Didwana, Nagaur in western Rajasthan with 158 mm.

According to the department, the maximum rainfall of 304 mm was recorded in Baran, Niwai of Tonk 192 mm during the last 24 hours. During this, heavy rains were recorded in many parts of the Jaipur district. The Meteorological Department has issued a red alert of heavy to very heavy (more than 115.6 mm) rain at one or two places in Baran, Jhalwad districts on Saturday.

The department has issued an orange alert for one or two places in Jaipur, Ajmer, Tonk, Sawai Madhopur, Bhilwara, Bundi, Kota, and Baran districts. On the other hand, a yellow alert has been issued for Karauli, Udaipur, Pratapgarh, Nagaur, and Pali districts. Due to a low-pressure area and a Monsoon current, heavy to very heavy rainfall is expected over eastern parts of Madhya Pradesh from July 31 to August 1 and over eastern parts of Chhattisgarh and Uttar Pradesh on July 31.

The IMD has issued a ‘red alert’ for parts of Rajasthan and Madhya Pradesh. At the same time, between August 1 to 2, there may be very heavy rain at isolated places with rain in western Uttar Pradesh. The IMD said that the present round of rain activity is likely to continue over parts of North India with heavy rains over Jammu and Kashmir on July 31, Punjab on August 1, Himachal Pradesh till August 2, and Uttarakhand and Haryana till August 4.

He said that a red alert has been issued for very heavy rain at isolated places in Satna, Guna, Sheopur, Chhatarpur, and Tikamgarh districts while 17 districts of the state are Shahdol, Umaria, Anuppur, Rewa, Sidhi, Singrauli, Panna, An orange alert for heavy rainfall has been issued for Damoh, Sagar, Neemuch, Mandsaur, Ashok Nagar, Shivpuri, Gwalior, Datia, Bhind and Morena.

Officials said that water is set to be released from dams and barrages in West Bengal as the state is full of water after two days of incessant rains. Due to incessant rains in the state and neighboring Jharkhand, the water unit Thus the water level is rising. The West Bengal government has given permission to release up to one lakh cusecs of water in the Damodar Valley.

02/03/2021/9:44:am
Mumbai: Loco Engine, which has witnessed the development of Indian Railways, is currently adorning the CSMT's Heritage Gallery. Three more heritage locos have been...

26/07/2020/10:35:am
Seoul: North Korean leader Kim Jong Un applied a complete lockdown in the city of Kesong near the South Korean border, stating that he...