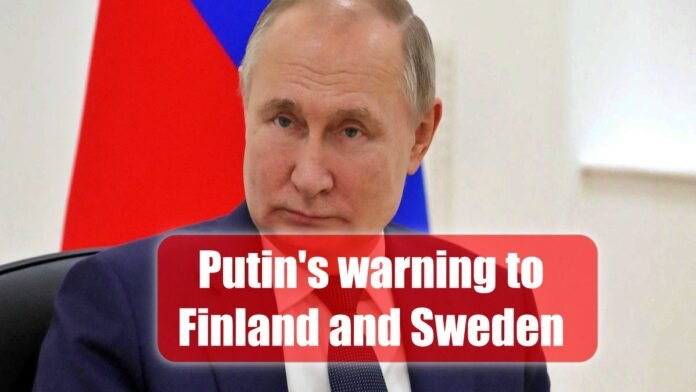 WASHINGTON: US ally NATO has invited Finland and Sweden to join the military organization. After which Russian President Putin warned Finland and Sweden not to deploy foreign troops on the border. He said that if this happens then Russia will give a befitting reply to it.
However, Putin said he has no objection if Sweden and Finland join NATO. Putin told Russian media after talks with regional leaders in the Central Asian former Soviet state of Turkmenistan that we would give a befitting reply if foreign troops and weapons were deployed on our borders.

He said that the deployment of foreign forces can become a cause of danger for us. So we have to be ready for it. Putin said that the neighboring countries should understand that earlier there was no threat to us, but now we will create a danger to those areas from where we are threatened.

Turkey’s opposition: Russia’s Ukraine seems to be showing the success of NATO in the midst of the war as Russia’s two neighboring countries Sweden and Finland are preparing to join NATO.

Let us tell you that earlier Turkey was opposing it, but now Turkey, Finland, and Sweden have agreed to protect each other. Because of this, perhaps Russia’s tension in North Europe may increase.

NATO statement:
A statement issued by NATO leaders on Wednesday said Sweden and Finland joining NATO would secure them, secure the Euro-Atlantic region, and strengthen NATO. He said that the security of Finland and Sweden is also of direct importance to this alliance.

After Ayodhya, now the issue of Krishna Janmabhoomi in Mathura is ready to be...

10/08/2020/7:37:pm
Mathura: Despite the refusal of the Vishwa Hindu Parishad and the Rashtriya Swayamsevak Sangh, the campaign to liberate Krishna's birthplace in Mathura is going...

30/03/2022/9:16:pm
New Delhi: A big update has come from Pakistan. Today, the final decision on the no-confidence motion against the Imran Khan government is going...

29/08/2021/11:09:am
New Delhi: Former Congress President Rahul Gandhi on Saturday asked the Indian Council of Historical Research (ICHR) to remove the picture of the country's...

On 26 February, markets will remain closed in the entire country,...