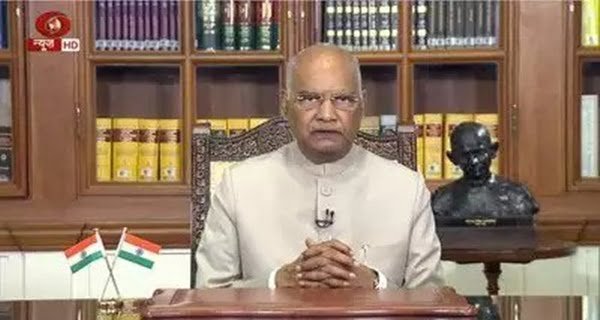 The President said that a supernatural effort was made by the government to respond effectively to the challenges faced by the Kovid epidemic. President Kovind said, ‘This year, celebrations of Independence Day will be banned in many places of the country. The world is facing a deadly virus, due to which all kinds of activities have been banned. The Kovid epidemic has changed the world, what we were before may not happen now. President Ramnath Kovind said that the nation is indebted to doctors, nurses, and other health workers who have been at the forefront of the fight against the coronavirus. Unfortunately, many of them have lost their lives battling the epidemic. He is our national hero. Our brave soldiers, while protecting our borders, laid down their lives. Those worthy sons of Bharat Mata lived and died for national pride. The entire nation salutes the martyrs of the Galwan Valley.

Ontario declares state of emergency after truck jam in Canada

12/02/2022/9:57:am
Toronto: On Friday, the premier of the Canadian state of Ontario declared a state of emergency in view of truck jams on the border...

Manu and Rahi’s journey ended in Tokyo Olympics, 25m. Pistol out of finals

30/07/2021/9:43:am
Tokyo: India's dismal performance in the shooting event of the Tokyo Olympics continued with Manu Bhaker and Rahi Sarnobat missing out on the finals...

22/06/2021/8:47:pm
New Delhi: The Supreme Court has dismissed petitions challenging the decision to cancel the CBSE and ICSE examinations. Hearing held on Tuesday, the court...