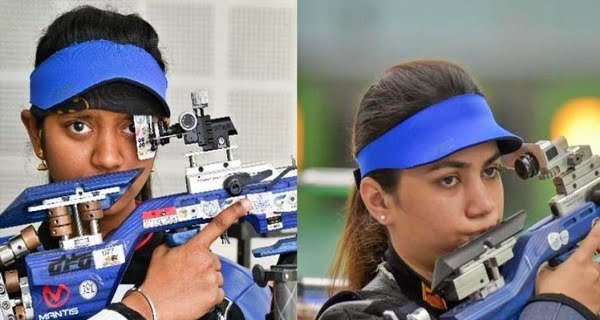 Tokyo: India had a poor start in the shooting event of the Tokyo Olympics on Saturday when medal hopefuls Elavenil Valarivan and Apurvi Chandela failed to make it to the finals of the women’s 10m air rifle event. World number one Elavenil, who is playing in the Olympics for the first time, finished 16th with a score of 626.5, and Chandela was ranked 36th among 50 shooters with a score of 621.9. Each shooter had to play six series of ten shots each.

China’s Qian Wang won the first gold medal of these Games, finishing first with an Olympic record score of 251.8. Anastasia Galashina of the Russian Olympic Committee scored 251. Silver with 1 score and Nina Christine of Switzerland 230. Won the bronze medal by scoring 6. Elavenil and Chandela had a poor start in the qualification and both could not recover from them. The top eight shooters qualified for the finals, with Norway’s Duestad Janet Hague finishing first with a score of 632.9, setting a new Olympic qualification record.

Korea’s Park Heemun (631.7) came second and America’s Mary Tucker (631.4) came third. Elavenil, who won gold at this year’s ISSF World Cup in Delhi, scored 10.9 in the third series after scoring 9.5 and 9.9 in the first two series. She could not maintain this form for the next three series and go further down the qualification ranking with a score of nine. On the other hand, Chandela, who finished 34th in the Rio Olympics, did not look at all in rhythm.

Chandela won gold in two World Cups in 2019. Elavenil fell two points behind Galashina, who took eighth and last qualification place in the qualification. India won its first quota of shooting at the Tokyo Olympics in the women’s 10m air rifle. Anjum Mudgil and Apurvi Chandela had won this quota in the 2018 World Championships held in Korea. Mudgil’s quota was given to Elavenil on the basis of the current form.

Volcanoes bursting on Caribbean island remains flying up to 6 KM

10/04/2021/7:55:pm
St. Vincent: The Caribbean island of St Vincent exploded in a volcano that had been lying dormant for decades. The incident that happened on...

The IT ministry issued a notice to Twitter, asking why no action should be...

12/11/2020/10:13:pm
New Delhi: The Union Ministry of Electronics and IT has issued a notice to social networking website Twitter for showing Leh as part of...