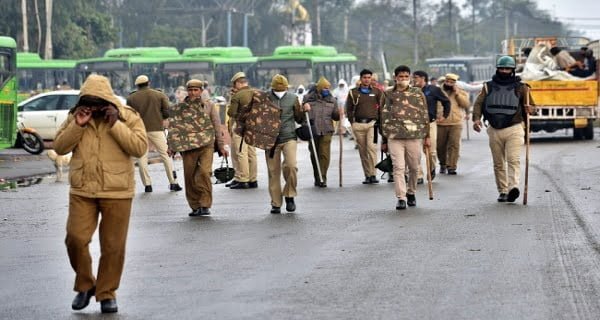 New Delhi: Farmers, who have been protesting against the new agricultural laws of the central government for more than two months, will today undertake the Chakka Jam agitation on the NH and State highways across the country. During this time, for about 3 hours, these farmers will jam the main road of NS and states. Although the impact of this campaign, which runs from 12 noon to 3 pm, is likely to fall on Delhi, strict security arrangements have been made in its national capital. After the farmers reached the historic Red Fort during the Tractor Rally on 26 January, the police are in no mood to take any relaxation in the security of important places in Delhi.

In this sequence, strict vigil is being exercised in the Red Fort and surrounding areas since this morning. Restrictions have already been placed in the areas around the Red Fort, even after this, a large number of police personnel have been deployed today. In view of the farmers’ movement, Delhi Police personnel have been deployed in the security of the fort. Let us tell you that earlier the farmer leaders had announced in clear terms that a nationwide Chakka Jam movement will be organized on February 6, in which vehicles will not be allowed to run on the roads for 3 hours. Farmer leaders have also said that there will be no jam in Uttar Pradesh and Uttarakhand.

Bharatiya Kisan Union leader Rakesh Tikait, who has been staging a strike with thousands of farmers on the Ghazipur border, has said that the Chakka Jam movement will be peaceful. He has told the farmers that wherever they are, they will agitate peacefully in the area. Explain that farmers of many states of the country including Haryana, Punjab, UP and Uttarakhand have been agitating against the agricultural laws for the last almost two and a half months on the Singhu, Tikri and Ghazipur border in Delhi. Last month, on 26 January, farmers took out a tractor rally in Delhi in support of their demands.

Sonia Gandhi will leave the post of Congress president, told the party, choose the...

23/08/2020/5:28:pm
New Delhi: The outgoing Congress President Sonia Gandhi has appealed to the Congress to elect a new chief. It is believed that she is...

IRCTC website changed, now these facilities will be available while booking train tickets

Corona vaccine for children up to five years, Pfizer sought permission to approve the...

02/02/2022/8:29:pm
Washington: Pfizer on Wednesday asked the United States to approve its anti-Covid-19 vaccine for children up to five years of age, so that very...

Whether it is a lockdown or not, leave your employment concerns...

Chennai Super Kings’ Ravindra Jadeja out of IPL due to injury