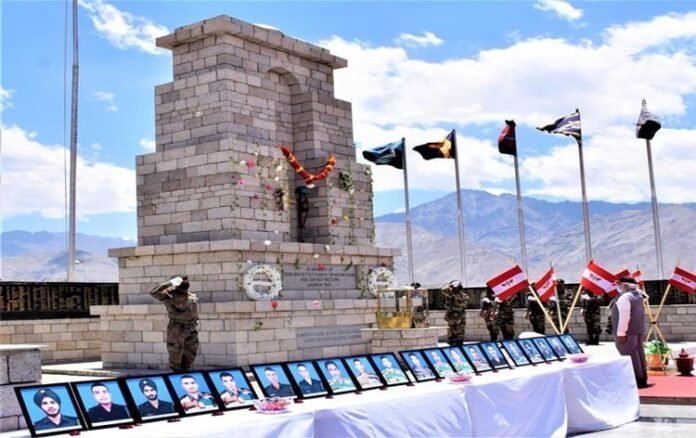 Leh: Prime Minister Narendra Modi undertook a day-long whirlwind visit to Leh today. In a surprise to all, he came to Leh this morning and touched all the important points to send a strong signal across the borders and to boost the morale of the soldiers guarding the country’s sovereignty at the borders. The Prime Minister also addressed the army soldiers at Nimo army establishment and has said that the courage, valor, and dedication of the Indian army to protect the honor of Mother India is incomparable.

Ladakh woke to know that Chief of Defence Staff Gen Bipin Rawat would be visiting after Defence Minister Rajnath Singh tour was rescheduled yesterday. However, giving surprise to one and all, PM Modi came to Leh this morning in a special aircraft.
He was accompanied by the CDS General Bipin Rawat and Chief of Army Staff General M M Naravane. Immediately on his arrival, PM Modi embarked to Nimo where he witnessed demonstrations of Military Engineering capabilities. Mr. Modi addressed the Army Jawans for nearly thirty minutes. In his address, PM said that their courage is higher than the heights where they are posted today. He connected to Ladakh by invoking the architect of modern Ladakh Kushak Bakula Rinpoche and remembered the bravery of the Fire and Fury Corps.

Later, the Prime Minister paid homage to the martyrs at the War Memorial at Hall of Fame in Leh. Then, he proceeded to interact with the injured soldiers in Galwan skirmish at Army General Hospital. PM Modi complimented their courage and valor in protecting the country’s sovereignty. He enquired the progress of treatment from the Army officials. His day visit to Leh is a morale booster and strong support to the soldiers posted at a height of 15 thousand feet in the toughest terrain. Mr. Modi’s visit also has set the tone for the terms for the future talks between army commanders in the eastern ladakh region.

New guidelines of DGCA, ‘Unruly passenger’ tag will be imposed for...

Seeing danger of Omicron, rules changed for those coming from abroad,...

Bitcoin broke all records again! Price of 1 bitcoin reached near...