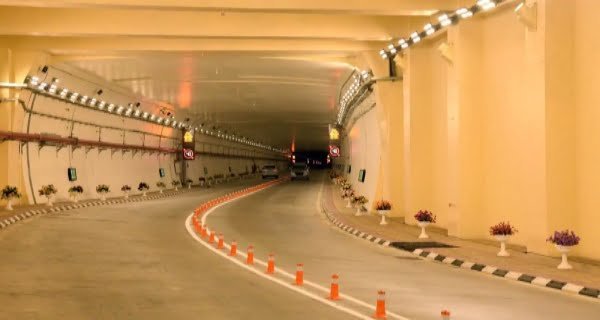 Rohtang: Prime Minister Narendra Modi on Saturday inaugurated the “Atal Tunnel” at Rohtang in Himachal Pradesh at an altitude of 10,000 feet. According to the Prime Minister’s Office, the Atal Tunnel is the longest highway tunnel in the world. Its length is 9.02 km which will connect Manali to Lahaul-Spiti valley. Earlier this valley was cut off from contact for about six months due to heavy snowfall.

Modi inaugurated the tunnel by cutting the lace. Several other dignitaries including Defense Minister Rajnath Singh, Himachal Pradesh Chief Minister Jairam Thakur, and Union Minister of State for Finance Anurag were present on the occasion. Strategically significant, this tunnel is built in the Pir Panjal Range of the Himalayas at 10,000 feet above mean sea level with ultra-modern features. This tunnel will reduce the distance between Manali and Leh by 46 kilometers and the travel time will also be reduced by four to five hours.

The Atal tunnel is designed to have a traffic density of 3000 cars and 1500 trucks per day with a maximum speed of 80 kilometers per hour. The Atal Bihari Vajpayee government had decided to construct this strategically important tunnel under the Rohtang Pass and the foundation stone of the connectivity route was laid on 26 May 2002 on the southern portal of the tunnel. In December 2019, the Modi government decided to name the tunnel as Atal Tunnel in honor of the former Prime Minister, who died last year.

Big fall in gold price on MCX, now the government is giving opportunity to...

29/08/2020
New Delhi: In the domestic market, on Friday, based on the global market, gold-silver prices (Gold-Silver rates) saw a rise. Gold futures for October...

Kamakhya temple complex will open for devotees from Sunday

30/07/2020
Beijing: There have been more than 100 cases of coronavirus infection in China for the second consecutive day. South Africa has become the fifth...

09/11/2020
Kabul: A suicide car bomb attack on a police station in Afghanistan's southern Kandahar province has killed at least four people and injured 40...