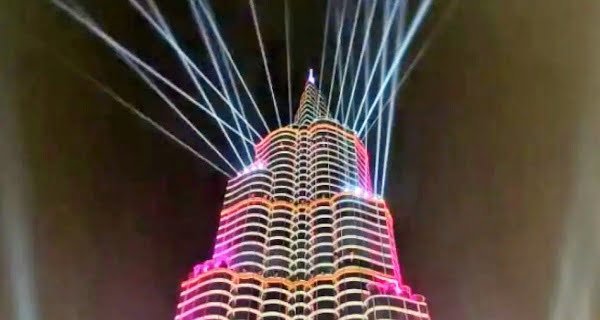 Kolkata: The laser light show of Durga Puja pandal, built on the lines of Burj Khalifa of Dubai in the Lake Town area of ​​Salt Lake City in Kolkata, has been called off. Three different pilots had complained to the Kolkata Air Traffic Control (ATC) in this regard. The pilot said that he was having trouble landing the plane because of the light. ATC had informed the Kolkata Airport Authority about this, after which the laser light show has been called off. Netaji Subhas Chandra Bose International Airport located in Dum Dum, Kolkata is very close to Durga Puja Pandal.

Let us tell you that a huge Durga Puja pandal has been prepared in Sribhoomi of Dakshin Dum Dum. This pandal has been designed on the lines of Burj Khalifa of Dubai. A laser show was being run to make the pandal more attractive. However, now it has been stopped on the complaint of three pilots of Netaji Subhas Chandra Bose International Airport. A senior airport official said that as soon as the ATC received the complaint, the local police were informed in this regard and the laser show was stopped completely.

This pandal is 145 feet high. It has been made with the help of 6,000 acrylic sheets. Designed in the design of the world’s tallest building Burj Khalifa, the pandal is decorated with such lights that everyone is looking forward to seeing it. More than 250 workers have prepared it after working hard for three and a half months day and night.

State Fire Minister Sujit Bose while giving information about the problem in the movement of aircraft due to the lights of the pandal said that we have made the tower height keeping in mind the limit set by the Airports Authority of India. Let us tell you that laser shows have been banned around airports across the country because laser light causes a lot of trouble to the pilots during the landing of the aircraft.

The ‘lone elephant in the world’ will get help, Cher reached Pakistan

28/11/2020/9:37:am
Islamabad: Famous singer and actress Cher is about to arrive in Pakistan to celebrate the farewell of Kavan, who is being described as 'World's...

Wedding season will start with Devuthani Ekadashi on 25th, no wedding moment after 11th...