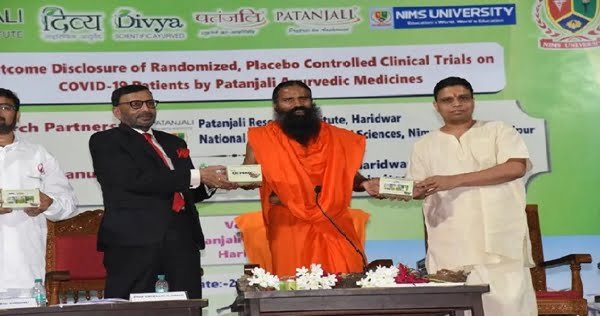 New Delhi: All the countries of the world, including India, are currently suffering from the corona virus (Covid-19). No vaccine has been developed for this virus yet. However, some medicines are said to be effective in treating the infected. Meanwhile, Patanjali Ayurved, the institute of Yoga Guru Baba Ramdev, has launched Coronil, the Ayurvedic medicine of Corona. Ramdev said that this medicine has been made only from indigenous things. Coronil memes mulathi, giloy, ashwagandha, tulsi, sanshari juice have been used.

3 medicines in Patanjali’s corona kit
The corona kit that Ramdev has launched, in addition to coronil, also contains inhaled vats and atomic oils. Ramdev says that using all three together can eliminate corona infection and prevent epidemics.

How much does coronil cost?

After the clinical trial, Patanjali has prepared a corona kit. It will be available for Rs 545.

What is coronil made of?
According to Acharya Balakrishna, coronil contains a mixture of cinnamon, long, peeple, dry ginger, mulathi, giloy, basil, ginger, black pepper and mulathi. Ashwagandha, Shasari juice and atomic oil have also been added to it.

This medicine is authentic from all the major institutes, journals etc. at national and international level depending on its use, treatment and effect. This research has also been published in the International Journal of Biomedicine Pharmacotherapy of America. Patanjali claims that this research has been done jointly by Patanjali Research Institute (PRI), Haridwar and National Institute of Medical Science (NIMS), Jaipur. The drug is being manufactured by Divya Pharmacy, Haridwar and Patanjali Ayurved Limited, Haridwar.

How does it work in transition?
According to Acharya Balakrishna, Ashwagandha Kovid-19’s RBD included in Divya Coronil tablet does not allow the ACE of the human body to meet. Due to this, the infected human body cannot enter healthy cells. At the same time, Giloy also prevents infection. Tulsi’s compound not only prevents the rate of increase in coefficient of Kovid-19 by attacking RNA-polymerase, but also eradicates the virus on regular eating. Whereas shwassari juice prevents the formation of thick mucus (phlegm) and reduces the swelling of the lungs by eliminating the mucus formed.

Where can I buy Coronil?
Baba Ramdev said that this medicine made from Ayurveda will be found in Patanjali’s store in the next seven days, besides an app will be launched on Monday with the help of which this medicine will be delivered at home.

Ramdev said that 69 percent patients recovered from this medicine within three days. That is, turned negative from positive. At the same time, 100 percent patients have been cured in 7 days through this medicine. Ramdev said- ‘Even if people question us on this claim right now, we have answers to every question. We have followed all the scientific rules.

24/07/2021/10:14:pm
Tokyo: The Indian women's hockey team played a strong game in the first two quarters against the world number one Netherlands in the opening...

Work4Progress India Concludes its Annual Workshop on a Successful Note

01/12/2022/5:46:pm
The Work4Progress (W4P) programme of the "la Caixa” Foundation of Spain, concluded its India platform annual workshop at the Indian Habitat Centre. The programme...

Impact Guru Foundation recognized as one of the “Top 20 best...