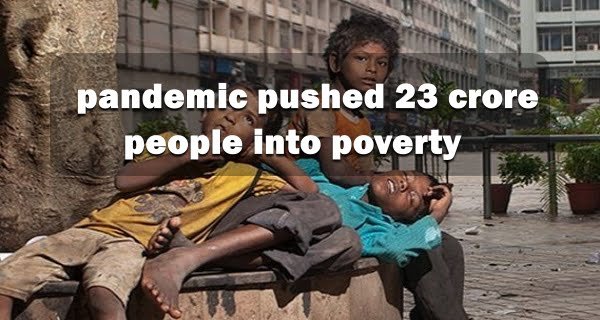 New Delhi: Coronavirus infection pushed 23 crore Indians into poverty during the year 2020. The worst-hit was youth and women. At the same time, the second wave of Coronavirus (2nd Wave of Coronavirus) has increased the crisis more than ever. A report from Bangalore’s Azim Premji University states that the strict lockdown imposed in India since March 2020 took away employment from about 10 crore people. Of these, 15 percent did not get work till the end of the year. It had a very bad effect on women. About 47 percent of the women could not get employment even after the ban was over.

20% of families’ income ends in April-May 2020
The university report considers those people whose daily income is less than Rs 375. It says that everyone’s income has decreased, but the outbreak of the epidemic has been the worst on the poor. Asia’s third-largest economy Covid-19 was already undergoing a period of lethargy, but the epidemic slowed it down further. It was estimated that 50 million people would have risen above the poverty line last year, but instead, the income of 20 percent of the families was completely lost in April, May 2020. A writer of the report Amit Basole said that the second wave is going to make the situation worse. 20 percent of the people involved in the study said that even after six months, their food and drink have not improved.

Millions of people reached the brink of starvation in 2020
During the year 2020, at least 155 million people in the world suffered from hunger. There were about 1,33,000 people in it, who reached near death due to starvation. To save them, immediate food was needed. The report warns that the year 2021 is going to be more terrible than the last. The year 2021 will be very severe and worse. This is disclosed in a UN report with 16 organizations. The UN report is based on a survey conducted in 55 countries. According to the report, last year, due to the Covid-19 pandemic and lockdown, the world had to go through an economic crisis. In such a situation, millions of people had to live without food.

07/02/2021/10:34:am
Tokyo: Japanese Prime Minister Yoshihide Suga has expressed regret over a lack of a peace treaty with Russia and the ongoing territorial dispute over...