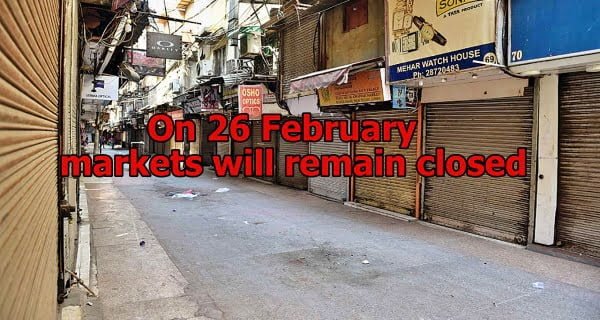 New Delhi: The Bharat Bandh has been called on 26 February to demand a review of the provisions of the Goods and Services Tax (GST) by the Confederation of All India Traders (CAIT-CAT), an organization of traders. On this day, all commercial markets across the country will remain closed. CAT claims that on this day more than 8 crore traders from all over the country will be on strike. On 26 February, under the leadership of CAT, the announcement of withdrawal of absurd and irrational provisions of GST and banning e-commerce company Amazon has been announced.

Know what the merchant organization says?
CAT National President BC Bhartia and National General Secretary Praveen Khandelwal said that under the many absurd and arbitrary provisions of GST, if the merchant who sells goods is not filing returns or is late or late, then the buyer is also responsible for which The merchant who purchased will not get the input credit of the tax given and such traders will have to pay tax again. Where is this justice? This did not happen even in the era of the Mughals and the British.

CAT’s National General Ministers Praveen Khandelwal and Bhartia accused the GST Council of distorting the nature of GST for its own benefit, saying that GST is completely a failed tax regime. The basic form of GST has been played with. All state governments are more concerned about their vested interests and have no concern about simplification of the tax system. Let me tell you that Cat has sent a letter to Prime Minister Narendra Modi yesterday, requesting his immediate intervention in this matter.

US issues guidelines, no new rules for safe air travel

03/07/2020
Washington: Federal officials said Thursday that airlines should consider limiting capacity on planes to promote social distancing, but stopped short of requiring them to...

Every incoming missile will be seen as a nuclear weapon, Russia warns

08/08/2020
Moscow: Russia's military warned in an article published on Friday that its country would see any ballistic missile coming into its territory as a...

30/06/2020
Beijing: China President Xi Jinping on Tuesday signed the national security legislation Beijing has tailor-made for Hong Kong into law. In a statement issued at...