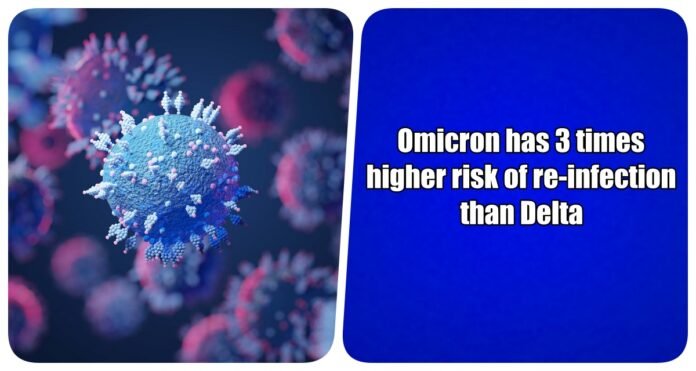 New Delhi: In a study conducted in South Africa, it has been said that the risk of re-infection from the new Omicron variant of the coronavirus is three times higher than that of the delta or beta variant. Scientists have published this study on Thursday. This study has been carried out on the basis of data collected by the South Africa Health System. This is the first research of its kind, which shows the ability of an Omicron variant at the level of infection to show how well the new variant is able to penetrate immunity. This research paper has just been uploaded on the medical preprint server and has not been peer-reviewed yet.

According to the research paper, out of 2.8 million (28 lakh) cases in South Africa, 35,670 cases are likely of re-infection, these figures are as of November 27. If the case of a person being positive comes after a gap of 90 days, then it is considered as a re-infection. Juliette Puliem, director of South Africa’s DSI-NRF Center of Excellence in Epidemiological Modeling and Analysis, tweeted, ‘Recent cases of re-infection in people who were found infected in the last three waves of the corona. Most of them were infected with the delta variant.

Need to know the effect of Omicron on immunity
Although Pulliam cautioned that the researchers did not have personal information, it was not clear how much damage Omicron caused to the immunity created by the vaccine. Researchers plan to work on this further. Puliam said, “Data is needed to ascertain the severity of the disease. Specifically linked to Omicron. It should also contain data of people who have been infected in the past.’ Scientist Michael Head of the University of Southampton has praised the research and described it as high quality.

He said in his statement, ‘This analysis is worrying. The new variant is easily distinguishing the immunity created due to the previous infection. It may be wrong, but it seems extremely unlikely.’ Due to this, expert and scientist Anne von Gottberg of the National Institute for Communicable Diseases in South Africa warned that the cases of infection have increased rapidly, But there is hope that the vaccine will still prove effective.

Still don’t know where Omicron came from?
In a news conference of WHO’s South African branch, Gottberg said, ‘We believe that there has been an increase in cases of infection in all parts of the country. Nevertheless, we believe that the vaccine will be effective against the severity of the disease and will protect people.

At the same time, WHO experts have asked countries around the world to reconsider the ban imposed on travel to South African countries. The WHO has said that a new variant of the coronavirus has been found in at least two dozen countries and its source has not yet been identified from where it originated.

Let us inform you that in mid-November, 300 cases of corona infection are coming in a day in South Africa, while 8,561 new cases were registered in the country on Wednesday, which was 4373 more cases than the day before and compared to Monday. The number was 2,273 more.

Demand Increasing in the realty sector, there is a possibility of further growth

13/10/2021/9:22:pm
Mumbai: The real estate industry after almost 8 years due to the control of the epidemic of Chinese virus Covid, fast recovery in the...

US presidential election: 72% of Indian Americans who will vote for Biden, only 22%...

16/06/2020/12:28:am
Portland: Fitness addicts bolted out of exercise centers, workers dreadful of open travel, and families going mix insane inside their homes during the corona-virus...