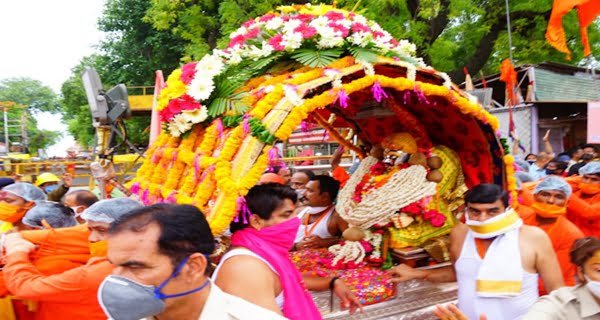 But this time the number of devotees has been controlled to protect from Covid-19. ” Meanwhile, at Omkareshwar Jyotirlinga in Khandwa district, the administration made special arrangements on the first Monday of the month of Shravan to rescue Covid-19. Mamta Khede, Chief Executive Officer (CEO) of Omkareshwar Temple Trust and Sub Divisional Magistrate (SDM) of Khandwa district, told that devotees through different online mediums like website and app to visit this Jyotirlinga of Lord Shiva situated on the banks of river Narmada- Controlled numbers were allowed at different times. However, he was not allowed to enter the sanctum sanctorum of the temple. He told, “To stop the crowd on Shravan Monday, we stopped the bathing of devotees at the Narmada Ghats of Omkareshwar.

The entry of Kanwari in this religious city was also banned. ” Due to the outbreak of Covid-19, the administration has also had to change the path of Lord Shiva’s “ride” (traditional procession) in Ujjain and Omkareshwar. Officials said that on the first Monday of the month of Shravan, a very limited number of people were allowed to participate in both religious towns, shortening the traditional route of the “ride” of Lord Shiva. He told that thousands of Shiva devotees throng these processions every year. But this time due to the outbreak of Covid-19, there was a ban on the participation of common devotees.

14/07/2020/10:14:am
Kathmandu: Nepal's Prime Minister KP Oli is targeting India these days. He claimed on Monday that India has created fake Ayodhya for cultural encroachment....

20/10/2020/11:42:pm
LACHEN, Switzerland:  Octapharma is pleased to announce that the U.S. Food and Drug Administration (FDA) has approved an updated Prescribing Information (PI) for NUWIQ®, Octapharma’s...

Taliban does not distribute thousands of tonnes of wheat sent from India properly: Ahmed...

05/09/2022/1:50:pm
Panjshir Valley: Ahmed Masood, leader of the National Resistance Front of Afghanistan, the main opposition faction of the Taliban, has said that the Taliban...

Important news for 6 crores PF holders! EPFO made this rule...

Now you can translate in Sanskrit too, Google has added these...