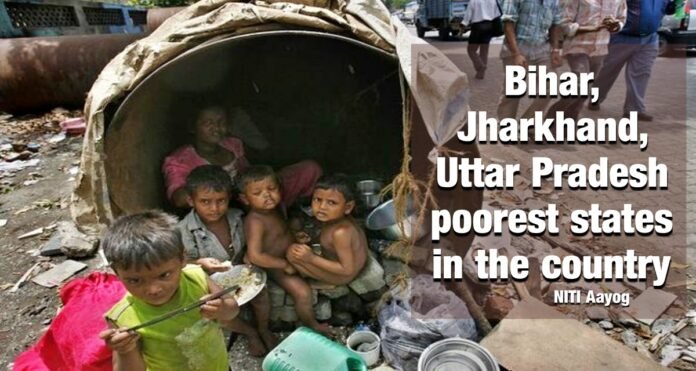 New Delhi: According to the Multidimensional Poverty Index (MPI) of NITI Aayog, Bihar, Jharkhand and Uttar Pradesh have emerged as the poorest states in the country.

According to the report, India’s National Multidimensional Poverty Index is prepared using a globally accepted and robust methodology developed by the Oxford Poverty and Human Development Initiative (OPHI) and the United Nations Development Program (UNDP). In the Multidimensional Poverty Index, the economic condition of the family and the state of deprivation are mainly assessed.

The Sustainable Development Goals (SDGs) framework adopted by 193 countries in 2015 has redefined development policies and government priorities to measure development progress around the world.

Rajiv Kumar, Vice Chairman, NITI Aayog, said in the introduction of the index, “The development of India’s National Multidimensional Poverty Index is an important contribution towards establishing a public policy tool. It monitors multidimensional poverty, calls for evidence-based and focused interventions to ensure that no one is left behind.”

Kumar further said that this baseline report of India’s first national MPI is based on the reference period of the National Family Health Survey (NFHS) 2015-16. He said that the national MPI has been prepared using 12 key components covering areas such as health and nutrition, education and standard of living.

We can found Power and peace in Bhagavad-gītā in times of disorder: Tulsi Gabbard

13/06/2020/8:22:pm
Washington. America's first Hindu MP, Tulsi Gabbard, said that in this turbulent period one can find certainty, strength and peace in the Bhagavad Gita....

12/09/2020/10:35:am
Washington: During the talks between India and the US on Friday, it was agreed that they would try to improve quadrilateral consultation with Australia...

08/08/2020/10:36:pm
Mumbai: Bollywood's famous actor Sanjay Dutt has been admitted to Lilavati Hospital in Mumbai. According to the information, he is having trouble breathing. His...

In first meeting of the new cabinet, one lakh crore to farmers through mandis

08/07/2021/9:08:pm
New Delhi: After the expansion of the cabinet of Prime Minister Narendra Modi, the first meeting of the new cabinet was held on Thursday....