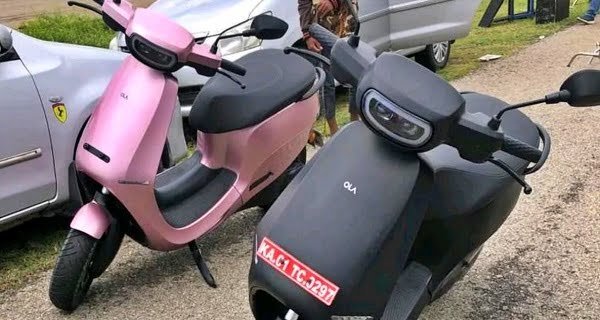 Bengaluru: India’s EV revolution is coming, and Ola is going to take a big part in it. Ola’s new electric scooter has been sighted numerous times while being tested. Now, for the first time, without any camouflage, new shades of the scooter have been spied on. There are 3 colour variations in Ola’s electric scooter -matte black, matte pink, and blue. Each and every one of these colours has its own look that is absolutely dashing. Ola has opened bookings for these scooters at just INR 500, and the amount is fully refundable.

“India has the opportunity and potential to become the world leader in EVs and at Ola, we are proud to lead this charge,” said the chairman and Group CEO of Ola.

According to a Cartoq report, those who pre-ordered their scooters will receive them first. The boot of the scooter could fit two full-size helmets while still leaving room for your knickknacks. It will also have a keyless entry. As a result, you would not have to remove the key. You would just be able to get on the scooter and it would recognise you. There would also be compatibility for a smartphone app that would be linked to the scooter and function as a key.

If you utilize Ola’s Hypercharger, the scooter can offer 75 km of riding range in just 18 minutes. They plan to deploy more than a lakh hypercharge across 400 cities. On a full charge, the riding range is estimated to be approximately 150 kilometres. A home outlet is estimated to take about 6 hours to completely charge the battery.

The scooter’s peak speed will be over 80 kmph, and it will reach 45 kmph in 3.9 seconds. As a result, when riding in city traffic, the scooter should feel lively. It should be able to overtake automobiles with ease, and Ola claims it is also rather agile. As per rumours, the battery pack will be detachable as well.

16/10/2020/11:42:pm
New Delhi:  Techmagnate, one of the most trusted digital marketing companies in India, released its Digital Report Card for 2019, revealing that it delivered a...

Taliban is brutal on women in Afghanistan, now only women commandos will give a...

WHO visits Wuhan, yet many questions on Corona not answered

10/02/2021/9:22:pm
Wuhan: After gathering some new information on the origin of Coronavirus Pandemic, a team of World Health Organization is leaving from China on Wednesday,...