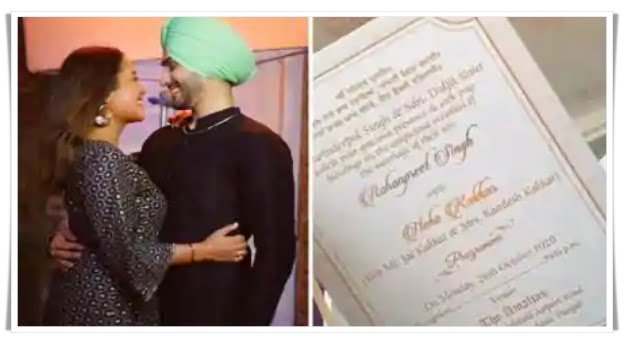 New Delhi: Be it Neha Kakkar’s songs, his love life, or his breakup … everything remains on social media. Recently, news of Neha Kakkar’s wedding came to light and there was an uproar as soon as the news of their groom was revealed. Neha Kakkar is going to marry Punjabi singer Rohanpreet Singh. It is reported that Neha and Rohanpreet are going to be married in Delhi on October 24. But according to the information coming out, Neha is going to register the marriage with Rohanpreet just 2 days before her traditional wedding.

A photo of Neha and Rohanpreet was revealed, which was said to be the photo of their stoppage. Since then, talks were happening on Neha’s wedding date. Spotboyi has quoted the source as saying that Neha’s wedding is going to be held on 24th October in full ceremony. But before October 22, the pair will register the marriage. Neha’s wedding cards have been distributed. According to the information, these registers will be married in the presence of Neha and Rohanpreet family.

Ever since the news of Neha’s marriage has come to light, the couple has been seen making love filled comments on each other’s posts and sharing photos together. Not only this, Neha and Rohanpreet’s first collaboration project ‘Nehu Da Vyah’ is also going to release on October 21. However, after the poster of this song surfaced, there were also reports that the news of Neha’s wedding is just a way to promote this song.

However, in this report, it has been claimed by quoting a close source that these two are going to get married realistically. Let me tell you that before marrying Neha, Rohanpreet had also reached the reality show of Colors TV to marrying Shahnaz Gill. However, due to Corona, the show had to be stopped midway.

01/07/2021/4:57:pm
New Delhi: Controversy continues in the European Union over Covishield. Switzerland and seven European Union countries have allowed travel to people who have received...

24/11/2020/10:31:am
Geneva: A committee of human rights experts affiliated with the United Nations has said that Carlos Ghosn, a former top official of Renault-Nissan, Taken...

16/06/2020/12:28:am
Portland: Fitness addicts bolted out of exercise centers, workers dreadful of open travel, and families going mix insane inside their homes during the corona-virus...