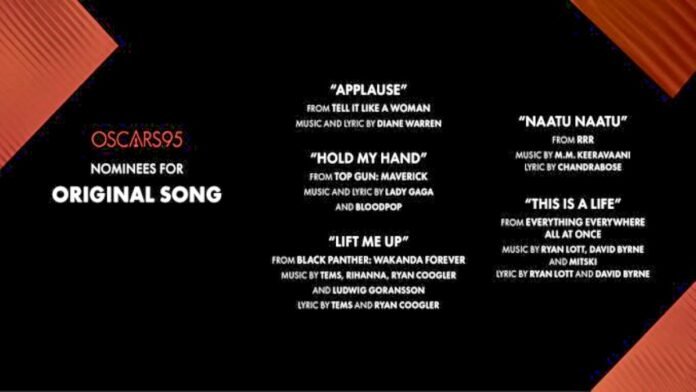 New Delhi: Bahubali fame director SS Rajamouli’s film RRR was released in theaters in March last year. This film earned tremendously. Cinematographers around the world also liked this film very much. The film’s famous song ‘Naatu Naatu’ is on people’s lips. This song has got the Golden Globe Award. Now this song has been nominated in the Best Original Song category of Oscar.

There are hopes that after the song ‘Jai Ho’ from Slumdog Millionaire in the year 2008, this song may also get the Oscar Award.

The song ‘Naatu Naatu’ has been picturized on South’s superstar Junior NTR (NTR Jr) and Ramcharan Teja (Ram Charan). Rajamouli, Ramcharan, and Junior NTR’s happiness knows no bounds since this song won the Golden Globe Award. The film’s director Rajamouli is also very happy. At the same time, all the users are praising the team by sharing the video of this song on Twitter.

Natu-Natu will compete with these songs
Films in this category are ‘Applause’ from ‘Tell It Like a Woman’, ‘Hold My Hand’ from ‘Top Gun: Maverick’, ‘Lift Me Up’ from ‘Black Panther: Wakanda Forever’ and ‘Everything Everywhere All at Once’. ‘ from ‘This is a Life’ has been nominated. The Twitter handle of the film’s official website tweeted, ‘We have created history. Proud and happy to share that Natu Natu has been nominated for Best Original Song at the 95th Academy Awards.

Jai Ho, from the 2008 British film Slumdog Millionaire directed by Danny Boyle, was the first Hindi song to win an Academy Award in the Best Original Score and Original Song categories. Its music was composed by AR Rahman and written by Gulzar. Hollywood actor Riz Ahmed and actress Allison Williams announced the nominations for the 95th Academy Awards in 23 categories here. The winners of the Oscars will be announced on March 12.

22/11/2020/10:15:pm
Mumbai: Lockdown may be re-imposed in Maharashtra amid increasing cases of Coronavirus since festivals in the country. Maharashtra Deputy Chief Minister Ajit Pawar said...

When will India’s indigenous corona vaccine ‘Covaxin’ get approval from WHO?

28/10/2021/8:27:pm
New Delhi: The Government of India has given a lot of information on when Bharat Biotech's vaccine will be approved by the World Health...

Allu Arjun gave this statement on his Bollywood Debut, said- ‘Not...

It Tells You How Loud You Snore, Apart From Tracking Sleep,...