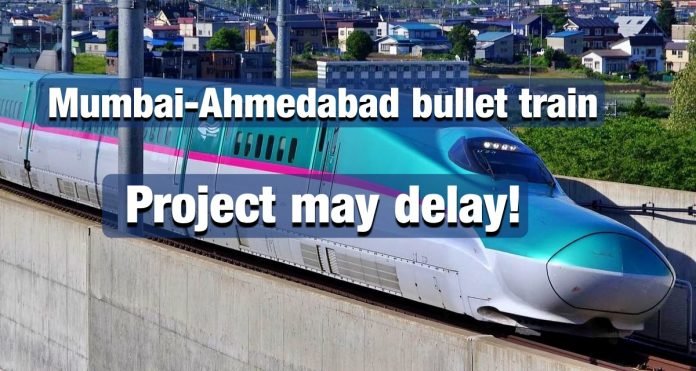 Mumbai: The deadline of PM Modi’s dream project Mumbai-Ahmedabad Bullet Train is expected to increase. The work of the country’s first high-speed rail project may be going on the fast track in Gujarat, but due to the non-acquisition of land in Maharashtra, the work has not started at the ground level.

According to Railway Minister Ashwini Vaishnav, at present, the bullet train deadline has been kept at 2026. But due to some problems, there may be further delay. Talking to a private channel two days ago, on the question of the bullet train, the Railway Minister himself asked whether the people of Mumbai do not want a bullet train. This question of Ashwini Vaishnav is being seen in connection with the acquisition of land for a bullet train in Maharashtra. It is noteworthy that 98 percent of the land has been acquired in Gujarat for the bullet trains, while only 31 percent of the land has been acquired in Maharashtra. A lot of work has been done in Gujarat with the help of the Government of Japan and a bullet train running through NHSRCL. Work on the project started for the first time in September 2017.

2023 was the target
Of this 508.17 km project, 155.76 km is in Maharashtra, 384.04 km is in Gujarat and 4.3 km is in Dadra Nagar Haveli. The initial deadline to complete the project was 2023, but it has now been increased to 2026. 28 percent of the land is in Maharashtra, while 97 percent in Gujarat and 100 percent in Dadra Nagar Haveli have been acquired. According to Railway Minister Ashwini Vaishnav, one has to prepare according to the situation of the country before running the high-speed train. Japanese officials also face difficulties in work according to the environment, although work has also been done during the Corona period. 140 pillars have also been cast for the project. Fast work is going on between Vapi to Ahmedabad.

Efforts underway in Maharashtra
To speed up the bullet train project, Minister of State for Railways Rao Saheb Danve has also held a meeting with the officials of the state government. It was told that 12 villages of Palghar district have agreed to give the land. For the Mumbai-Ahmedabad bullet train project in Vasai. About 2,000 houses are spread over various buildings and chawls. About 75 acres of land is to be acquired in Thane and Bhiwandi taluks. The consent of the 42 acres landowners has been received. Efforts are underway for the remaining land. Gujarat’s Vapi, Bilmora, Surat, and Bharuch stations are being worked on. A senior official associated with the National High-Speed ​​Rail Corporation says that the work on the bullet train is going at its own pace, the cooperation of the Maharashtra government is needed.

There will be 12 stations
A total of 12 stations are planned from BKC in Mumbai to Sabarmati in Ahmedabad. The National High-Speed ​​Railway Corporation will have a 21 km underground route from Bandra Kurla Complex to Kalyan Shilphata and will pass through Thane Bay. About 7 km of road will be constructed from Thane creek. For this, the survey work has been completed. This will be done using the new Austrian method.

04/04/2021/10:34:am
Chhattisgarh: On Saturday, there was an encounter between the security forces and Naxals in the border area of ​​Bijapur and Sukma district of Chhattisgarh....

03/05/2021/8:27:pm
Stockholm: Sweden plans to donate 1 million doses of AstraZeneca Vaccine to India under the United Nations-backed "Covacs" campaign. Under this campaign, vaccines for...

13 explosions one after another in Volcano, Indonesia

Pakistan will reopen Kartarpur corridor from September, Covid protocol will be necessary

22/08/2021/7:37:pm
Islamabad: Amid the effort to tackle the fourth wave of COVID-19, Pakistan has decided to allow Sikh pilgrims to visit Gurdwara Darbar Sahib Kartarpur...