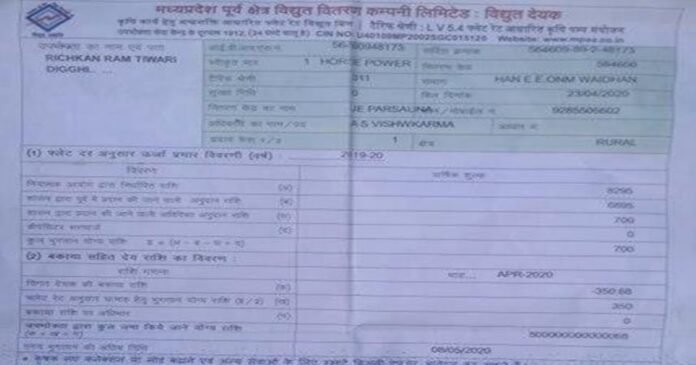 Singrauli. MP is amazing. Now the electricity department has done a strange job, he sent a bill of electricity of 80 trillion rupees to a teacher in Singrauli district, after which there has been a stir.

In Madhya Pradesh, complaints of increasing electricity bills are constantly coming out during the lockdown, but the power company has done a great job in Singrauli. Here the electricity company sent a bill of 80 trillion rupees to the house of a retired teacher Ram Tiwari. When the retired teacher first saw the bill, he went to the square, because no one could repay it. He immediately complained to the officials of the power company. After getting so much bill, they are upset and are constantly demanding to reduce it and give the right bill.

Consumers are upset after receiving the bill and have requested the power department officials to rectify the bill. On the other hand after the matter came to light, people have said that this bill does not belong to the entire Jabalpur region.

Seeing the bill or not believe one can use so much electricity. A technical error or printing error may have resulted in a mistake. In this regard, I will talk to Chief Engineer Rewa.

20/06/2021/11:01:am
New Delhi: Monkeys have created a ruckus in the national capital of the country, Delhi. Their number has increased so much that even the...

16/10/2022/12:25:pm
There are some songs that have a such sweetness that they settle in the heart only after listening once. Would love to listen to...

There will be heavy rain in some states including Maharashtra, Rajasthan,...

Palak Muchhal and Mithun got married, shared post and wrote...