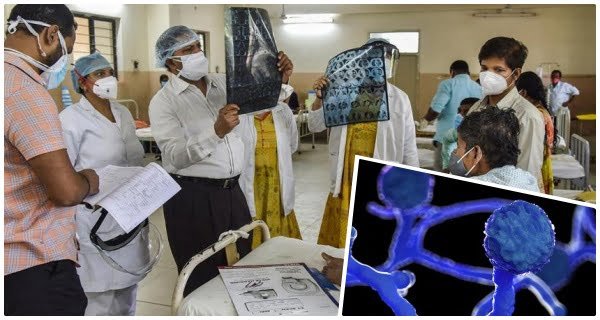 New Delhi: The second wave of Coronavirus is spreading with debilitating Covid patients, another deadly disease. So far, more than 7 thousand cases of Black Fungus have been reported in the country. So far, more than 200 people have lost their lives due to this disease. On Thursday, the central government has asked the states and union territories to notify the Black Fungs under the Epidemic Diseases Act.

Maharashtra has the highest number of cases and deaths, then Gujarat and Madhya Pradesh

In relation to black fungus, AIIMS director Randeep Guleria says – Mucaramicosis bacteria are found in soil, air, and even food. But they are less effective and usually do not spread infection. Before the Corona epidemic, the incidence of this infection was very less. Now due to Corona, a large number of cases are coming to light.

Dr. Guleria had described the use of steroids inadvertently as the major reason behind this infection. At the same time, he urged the hospitals to adopt the protocol of measures to control the infection. Because in Corona patients, this infection is seen to increase and death can also be higher.

He had said, ‘The wrong use of steroid is the major reason behind this infection. Black fungus infections are more likely to occur in people who are suffering from diabetes, are corona positive, and are taking steroids. To prevent this, we should stop the misuse of steroids. ‘

Wing Commander Abhinandan and PM Modi’s posters installed in Pakistan… ..this is the...

02/11/2020/9:53:am
Lahore: The issue of Wing Commander Abhinandan Varthaman of the Indian Air Force, whether it is the Parliament of Pakistan or the roads, is...

03/07/2020/12:00:am
New Delhi: The Hague-based international arbitration court has justified the action of Indian authorities in the Enrica Lexi case, saying that India is entitled...

Vaccination of people above 50 years may begin in March

06/02/2021/10:18:am
New Delhi: The Union Health and Family Welfare Minister, Dr. Harsh Vardhan, told the Lok Sabha on Friday that the process of vaccinating people...

18/06/2021/9:49:pm
Kolkata: Amidst the ongoing uproar in the BJP's state unit after the defeat in the West Bengal Assembly elections, a protest against party national...