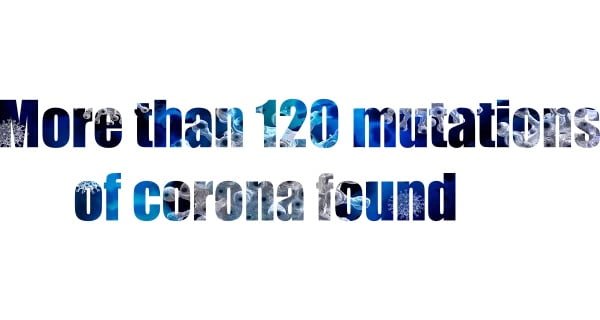 New Delhi: Where on one hand the havoc of the second wave of Corona has slowed down. At the same time, more than 38 crore samples of coronavirus have been tested across the country, but so far only 28 thousand of these genome sequencing has been done. Here now a study has also revealed that more than 120 mutations of coronavirus have been found in India so far, out of which 8 are the most dangerous. However, scientists are still investigating 14 more mutations.

Sequencing is being done in 28 labs of India:
The World Health Organization (WHO) has named dangerous variants as alpha, beta, gamma, delta plus, kappa, eta, and lota. All these variants have now been found in India as well. However, in these variants, some cases are more and some have less. At present, their genome sequencing is going on in 28 labs across the country. According to the news, the results of the preliminary report of the variant are quite shocking. If sources are to be believed, there is now a Kappa variant with the Delta in India. In the last 60 days, they have been confirmed in 76% of the samples so far.

What is Genome Sequencing:
It should also be known that only with the help of genome sequencing, scientists are able to understand the major changes taking place in the corona virus. Now it is necessary to have genome sequencing of 5% of the samples from every state of India, but still it is not possible to do even only 3%.

Mutations attack antibodies:
It may be noted that so far 28 thousand 43 samples have been genome sequencing in the country, in which serious mutations of delta plus and kappa have been found. Here scientists have described delta plus, beta, and gamma mutations as the most dangerous so far. These mutations spread rapidly and also attack antibodies in people. However, the study of scientists on the mutation of the coronavirus is still going on.

Pakistan High Court gives India the chance to appoint a lawyer in the Kulbhushan...

03/09/2020/8:03:pm
Islamabad: Hearing on the matter related to the appointment of the Defense Council in Islamabad High Court was held in connection with Kulbhushan Jadhav...

Will Return to India in a Few Days: Adar Poonawalla

02/05/2021/10:12:am
New Delhi: Serum Institute of India CEO Adar Poonawalla has said he will return to India from London in a few days. Poonawalla made...

10 days lockdown in Pune, know what will remain open, what will be closed