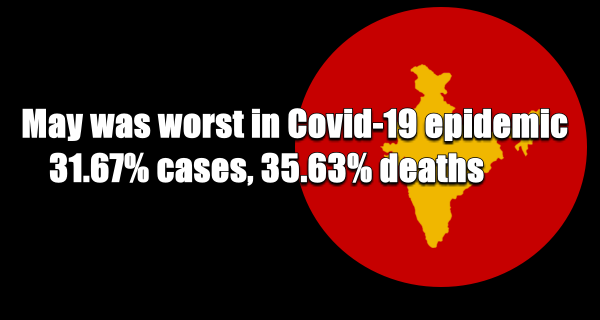 New Delhi: In India alone, during the second wave of Covid-19 in May alone, more than 88.82 cases of coronavirus were reported, which is 31.67 percent of more than 28 million people infected so far in the country. . Thus, it turned out to be the worst month during this pandemic. In May, 1,17,247 people also died due to this disease, which is 35.63 percent of the 3,29,100 deaths due to this infection so far.

So far, 4,14,188 cases of Covid-19 were reported in 24 hours on May 7 and on May 19, the maximum number of 4529 patients lost their lives. Daily new cases have been below three lakh since May 17 and less than two lakh cases are being reported daily for the last four days in the country. On May 10, the country had the highest number of 37,45,237 patients undergoing treatment.

By the way, the number of healthy people once again exceeded the new cases on the 18th consecutive day. In the last 24 hours, 2,38,022 patients have defeated the infection and so far 2,56,92,342 patients have become free from infection. The mortality rate is 1.17 percent. The patients treated are 7.22 percent of the total infected while the rate of recovery has been 91.60.

01/04/2021/10:27:am
New Delhi: The central government has withdrawn the decision to cut the rate of interest on Small Savings Scheme. Finance Minister Nirmala Sitharaman has...

24/08/2020/9:31:pm
Geneva: The World Health Organization has said that the use of plasma of people who have become diseased for the treatment of coronavirus infection...

New video of MS Dhoni viral, can return to the field in September!

14/06/2020/11:28:am
New Delhi: Today many states are expected to get relief from the scorching heat in the country. The Indian Meteorological Department has issued a...