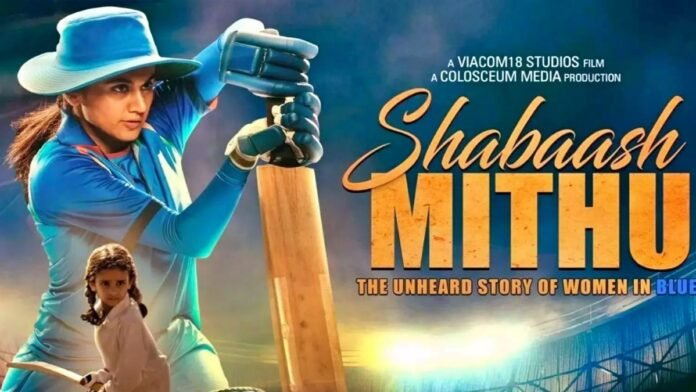 Recently, the trailer of ‘Shabash Mithu’, a biopic on former Indian women’s cricket team captain and veteran cricketer Mithali Raj, who retired from all forms of cricket, is out. The film is going to hit the theaters on July 15. The film, starring Taapsee Pannu, has created a lot of curiosity in the audience as well as in the sports world. Shabaash Mithu has become a hot topic for social media users after the official trailer of the film was released by Viacom18 on June 20.

Within a few hours of the trailer’s release, it has been watched by about 20 lakh people. At the same time, the Indian Women’s Cricket Team’s batsman Mona Meshram has also expressed her curiosity about the film. Sharing the trailer video of the film on the indigenous micro-blogging platform Ku App, she wrote, “Can’t wait to see it in the film. The trailer is very promising. Hopefully, the film will be very interesting and powerful like Didi’s life. Best wishes to the team.

The director of this film is Srijit Mukherjee and its story is written by Priya Aven. Shabaash Mithu is a film based on the life of Indian women’s cricket team captain Mithali Raj. The life of Mithali, the inspiration for millions of young girls of the country, will now be shown on the big screen through this biopic. Mithali has said at an event that she is eagerly waiting for this film.

Mithali Raj retired from T20 International cricket in 2019. He scored a total of 2,364 runs in 89 T20 Internationals, the most by any Indian in this format. At the same time, Mithali, who started playing for India in 1999 at the age of 16, is also one of the greatest players in the game.

13/11/2021/9:46:am
The Hague: Almost two years after the Coronavirus Pandemic, cases of infection are increasing in Western Europe, while vaccination rates in the region are...

20/08/2020/11:07:am
Washington: The Trump administration on Wednesday banned two United Arab Emirates (UAE) airlines. UAE companies have been banned from working for Iran Airlines, a...

Consent reached on seat sharing in BJP-JDU, will contest elections on this formula

04/10/2020/1:00:pm
Patna: There is finally agreement on seat sharing in NDA for the upcoming assembly elections in Bihar. According to information received from sources, after...

UP Legislative Council Election: Commission releases notification, voting for 12 seats to be held...

06/01/2021/5:06:pm
Lucknow: Elections have been announced on 12 seats of Uttar Pradesh Legislative Council. Election Commission has released its notification. Voting will be held on...