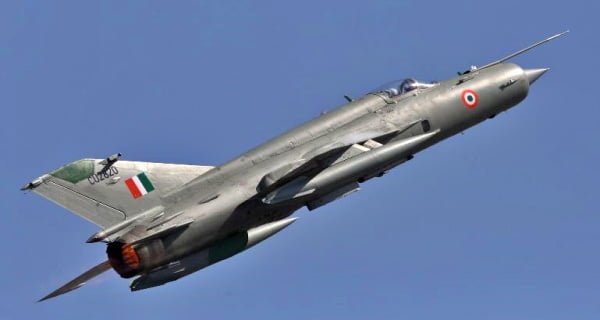 Jaipur: Indian Air Force’s MiG-21 aircraft crashed on Tuesday evening in Suratgarh area of ​​Rajasthan. However, the pilot ejected himself safely during the accident and saved his life. According to the information, the crash occurred due to technical reasons. Court of Inquiry has been ordered after the accident. From the spot, the work of removing debris from the plane is also going on. The aircraft flew from Suratgarh Air Force Base near the Pak border and the accident occurred shortly.

Shortly after the flight took off, the engine caught fire and the plane started appearing in front of the fire. The pilot somehow saved himself and his life. At the same time, the aircraft crashed in the premises of the airbase. According to sources, the plane took off at about 4.45 pm on Tuesday evening and within a few minutes the flames started coming out of the engine.

During this time, the pilot took the aircraft to a height even after the fire and then turned the plane towards the ground before being ejected. Due to this, the aircraft fell in the base of the base itself and did not reach the nearby populated area. This saved any kind of loss of life.

Only a few aircraft are left
Significantly, the country’s air force now has only 57 MiG-21s left. These aircraft have been serving in the Indian Air Force for almost 50 years. Despite being so old, the pilots who fly it consider it an excellent aircraft.

Bulli Bai App Case: Who is girl from Uttarakhand who turned out to be...

05/01/2022/9:54:am
Dehradun: Taking major action in the context of Bully by app controversy, Mumbai Police arrested 18-year-old Shweta Singh from Uttarakhand on Tuesday and it...

Russia will help in evacuating Indians, the case of student’s death will be investigated

02/03/2022/5:35:pm
New Delhi: Amidst the ongoing war with Ukraine, Russia said on Wednesday that it will intensify efforts to build a "humanitarian corridor" to give...

Situation worsened due to heavy rains in Pakistan, the ancestral houses of actors Raj...

30/07/2021/9:21:pm
Peshawar: The ancestral houses of legendary Indian film actors Dilip Kumar and Raj Kapoor, located in the city of Peshawar, Pakistan, were damaged due...

Pakistan will remain in FATF’s gray list, 6 criteria must be met by February

Soumya Kamble became the winner of the show, got the car...