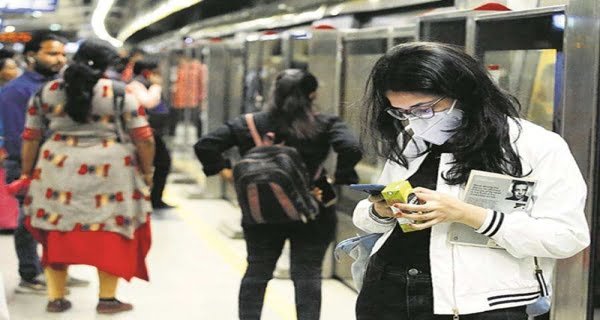 New Delhi: The central government had approved to run the metro in Unlock 4.0. After this, on Monday, September 7, the metro train started running across the country. During this time, strict rules of prevention of the corona epidemic are being followed. There is touch-free security in Delhi. Wearing a mask is mandatory. Failure to do so will attract a fine. In this way, the metro facility has been started after 169 days in other cities of the country except for Mumbai. However, in areas where the corona is in havoc, people will still have to wait. A phased arrangement has been made to operate the metro in the capital Delhi.

On Monday and Tuesday in Delhi, the Yellow Line, covering a distance of 49 km with 37 stations, will remain operational. For this, time has been fixed from 7 AM to 11 AM and 4 PM to 4 PM to 8 PM. In the second phase, metro service will be available between 7 am and 1 pm and between 4 pm and 10 pm. DMRC said that about 1,000 officers and staff have been deployed at the stations to follow the corona regulations.

Mobile Arogya Setu App has been made mandatory for travelers. Also the payment will be by smartcard only. Not all gates will be opened when trains arrive at the station. It has been decided that physical distancing is to be followed for the passengers. It is mandatory to wear masks in the metro station premises as well as in the train. Passengers will be allowed to enter the station premises only after thermal screening.

The stoppage time of trains has also been extended. At each station, the train will now stop for 20-25 seconds instead of 10-15 seconds. Where there is interchange facility, it has been increased from 35-40 seconds to 55-60 seconds.

26/03/2021/9:06:pm
Dhaka: The 2020 Gandhi Peace Prize awarded to Sheikh Mujibur Rahman, the Father of the Nation of Bangladesh by Prime Minister Narendra Modi on...

Gold import increased 470% in March due to decrease in duty and price, may...