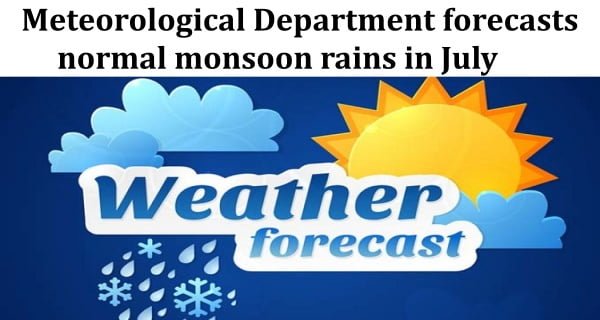 New Delhi: The India Meteorological Department said on Thursday that the Southwest Monsoon is likely to remain normal in the country in July. Giving information about the forecast for July, the Director-General of the department Mrityunjay Mohapatra said that good rains are not expected in the first week, but it is likely to pick up from the second part of the month.

“The overall monthly rainfall in the country in July 2021 is likely to be normal (94 to 106 percent of the long period average),” the department said. “Below or normal rains are likely over Northwest India and parts of South Peninsula, Central, East, and Northeast India, while normal or above normal rainfall is expected over Central India, adjoining Peninsular India and the Gangetic plain,” he said. forecast.”

Monsoon has advanced to the rest of the country except Haryana, Delhi, parts of West Uttar Pradesh, West Rajasthan, and Punjab. The temperature has crossed 40 degrees Celsius in many parts of North India and relief is not expected soon. Mohapatra said that there is little chance of the monsoon gaining momentum before July 7. No progress has been seen in the activation of Monsoon since 19th June. In June, 10 percent more rain was recorded than normal. Most of this rain also occurred between June 3 and June 19.

Mohapatra said that mid-latitude winds, unfavorable conditions of Madden-Julian Oscillation (MJO), non-formation of a low-pressure area over the north Bay of Bengal were due to monsoon break (difference between two rainy seasons in the monsoon season). When asked about the difference between monsoon rains, Mohapatra said, “Southwest monsoon takes a break and it is normal but such a long gap is not normal.”

Mohapatra said that India’s monsoon system is influenced by the surface temperature of the Pacific and the Indian oceans, so the IMD is carefully monitoring its changes. The department will issue a rain forecast for the second half of the season (August-September) in late July or early August.

Indian-American Vanita Gupta, who was nominated for the top post in the Department of...

10/03/2021/10:33:pm
Washington: Vanita Gupta has been nominated for a top position in the US Department of Justice by US President Joe Biden on social media...

Higher Education Institutions Leading the Way with Smart Admission Management in Tier 2 and...

26/08/2020/11:10:am
Gurugram, Haryana, India: India’s education system is known to be the third-largest in the world after the United States of America and China. What...