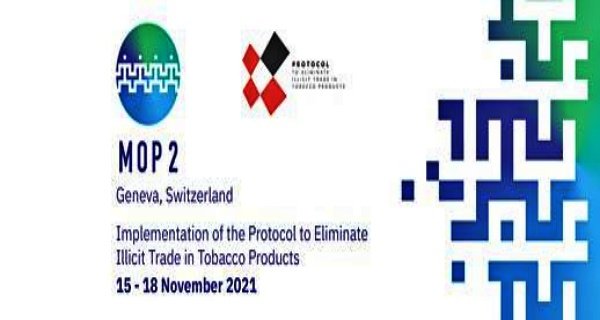 The Second Meeting of the Parties (MOP2) to the Protocol on Eliminating Illicit Trade in Tobacco Products ended today. This session was built on the foundations of the treaty that only entered into force three years ago. The meeting was conducted virtually due to the ongoing COVID-19 pandemic.

The three-day session saw a series of key decisions adopted, including the launch of an innovative plan to ensure reliable funding for the Protocol. To strengthen the implementation of the Protocol, Parties agreed to the setting up of a new investment fund to help support the drive to end the illicit tobacco trade.

This new initiative will source financial contributions beyond the traditional health sector, establishing a capital investment fund, the earned revenue of which will be used to support the activities of the Protocol.

Illicit trade in tobacco products dramatically reduces government revenue. It is estimated that up to 47 billion US dollars is lost globally every year.

The Protocol provides tools for preventing illicit trade by securing the supply chain. MOP2 has developed a road map that will help improve the global track and trace system. The object is to secure the tobacco supply chain and prevent the manufacture and circulation of illicit tobacco products. Parties to the Protocol also agreed to develop a global network so that they can exchange information on the movement of tobacco products.

Almost all Parties to the MOP attended the session – fifty-nine participated. Importantly, MOP2 agreed to strengthen international cooperation to ensure greater assistance between Parties – an important step that is expected to accelerate the adoption of best practices and support the introduction of innovations. The Parties also adopted a strategy for mechanisms of assistance and mobilization of financial resources to deepen the implementation of the Protocol.

Opening the event, Dr. Tedros Adhanom Ghedreyesus, Director-General, WHO said, “Taxation is the single most effective tool for reducing tobacco use, but illicit trade in tobacco products undermines the effectiveness of tax policies. Illicit tobacco products also exacerbate inequalities, because they are often cheaper and more accessible to vulnerable populations, such as young people.”

Dr. Adriana Blanco Marquizo, Head of the WHO FCTC Secretariat said, “The Protocol also supports us on matters that have been linked to our very safety and security. It is recognized that illicit trade in tobacco products is connected to transnational organized crime, raising income for its activities. Indeed, we have many reasons to work together to strengthen the effectiveness of the Protocol.”

A sequel to Satyajit Ray’s Apu is returning to big screen After 60 years:...

23/01/2021/12:52:pm
Panaji: In an edition where the International Film Festival of India (IFFI) pays tribute to legendary filmmaker Satyajit Ray, there is a fitting entry...

01/11/2021/9:38:am
Dubai: On paper, the world's strongest Indian batting order was badly shattered in the face of disciplined bowling from New Zealand and Virat Kohli's...

10/07/2020/8:53:pm
The Uttar Pradesh government has decided to impose fresh restrictions of 55 hours in the state from this evening amid spurt in Covid-19 cases....

26/01/2021/10:06:pm
Washington: US President Joe Biden said that it will take a long time to defeat the corona virus epidemic and he is working aggressively...