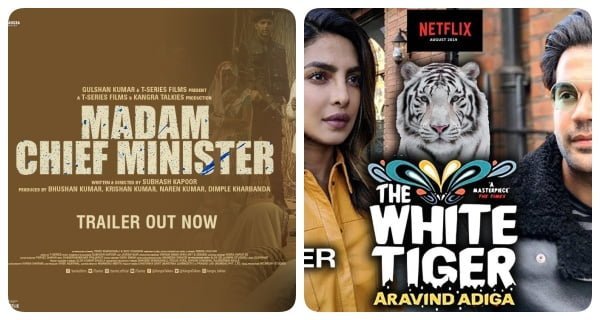 Mumbai: This Friday is proving to be a film for cinema lovers. Today, where the second film is going to be released at the box office after the coronation, a new name is being added to the list of Netflix. Actress Richa Chaddha’s film ‘Madam Chief Minister’ is being released at the box office, while Priyanka Chopra’s Most Awakened film ‘The White Tiger’ is releasing on Netflix. Both films were in the headlines for some time.

‘Madam Chief Minister’
In the film, Richa plays a Dalit girl who later becomes the Chief Minister of the state. Questions were being raised since the trailer’s release. This film was also being linked to Mayawati. However, the makers claimed that the film has no relation with Mayawati. Richa continued to receive threats about the film. Nawab Satpal Tanwar, the founder of the All India Bhima Army, threatened to kill the actress. It is also said that if someone bites the tongue of this actress, they will honor her. This film is being released at the box office today amidst all the controversies.
Watch the trailer of ‘Madam Chief Minister’ here:

‘The White Tiger’
Priyanka Chopra starrer White Tiger is releasing tonight on Netflix. Hollywood producer-director John Hart had filed a petition in the Delhi High Court, saying that the book on which the film White Tiger is based is from a writer named Arvind Ediga. Hart claimed that he had taken the rights to make this film from the author. Hearing on Thursday late evening, Justice C Hari Shankar rejected the stay petition filed by the producers saying that there was a single reason while pleading in court in less than 24 hours from the release of the film. Not told The film stars Priyanka Chopra, Rajkumar Rao and other actors. Explain that this film is based on Arvind Adiga’s book ‘The White Tiger’.
Watch the trailer of ‘The White Tiger’ here:

Indian TV channels received the most advertisements till October 30: Bark

05/11/2020
Mumbai: With the festive season approaching, TV channels received the highest increase ever in the week ending September 30. It surpassed the record of...

04/09/2020
Pune: Vimarsha, a leadership Talk Platform, is an initiative of VAJR Group of FLAME University which aims to take inspiration from revered personalitiesShri Sanyal...

Neera Tandon withdrew from the post of budget head

03/03/2021
Washington: After facing opposition from Democratic and Republican senators, Indian-American Neera Tandon, who is considered President Joe Biden's choice for the post of Office...

07/08/2020
Bhopal: The MP Board has released the time table for the special examination. The Special Examination is to be held from August 17 to...

31/08/2020
Hyderabad: Techwave Consulting Inc, a leading global IT services and solutions company revolutionizing digital transformations, announced that the launching of “TAX-IN Solution” as an...