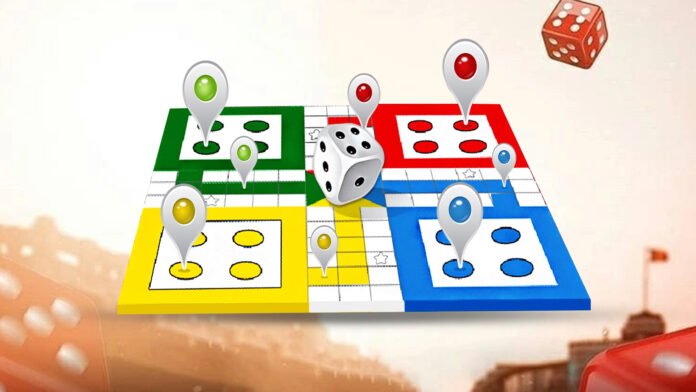 The epic poem Mahabharata describes an ancient Indian game under the name of ‘Pasha’ played on a board or cloth with the outline of a symmetrical cross. Two, three, or four players move their pieces after throwing six or seven cowrie shells, with the number of shells falling with their opening upward determining the number of spaces the player can move their pieces.

This is the Indian game now known as ‘Pachisi’, which has been played by the Mughal emperors and has been depicted on the walls of the caves of Ellora in Maharashtra.

In 1896, a simplified version of the game was patented in England under the name of ‘Ludo’, with the cowries replaced by dice and certain parts of the rules such as partnerships, protective castles, and two-way travel removed. With the changes, the game became less strategy-oriented and more based on chance, making it very suitable for children.

In the 20th century, the westernized game spread all around the world taking different names everywhere it went and sometimes featuring slight or more significant variations of the rules. In Spain it is called ‘Parchís’; in Germany, Bulgaria and many Eastern European countries it is known as ‘Don’t get mad, fellow’; in France, they play ‘Little Cavalry’; in North America, they have ‘Sorry!’; and so on.

The advance of digital technology and connectivity in the 21st century brought a whole new life under new shapes to the ancient game most popular globally under the name of ‘Ludo’. A number of Indian game studios have employed solid creativity in designing digital versions of the game with fresh board and token styles, new features, and online multiplayer options.

The worldwide popularity of Ludo has allowed Indian game developers and publishers to expand their user base around the whole world, with devoted players in Mediterranean Spain and Morocco, Latin American Mexico and Colombia, and Asian Pakistan and Saudi Arabia.

The Final Fantasy, Dragon Quest, and Kingdom Hearts franchises creator, Japanese gaming giant, and proven global leader Square Enix Holdings Co, was only able to gain a foothold on the Indian gaming market on their second attempt, this time in collaboration with Pune-based JetSynthesys on the Ludo Zenith game.

“We tried to enter the Indian market in 2013 but had to shut down our operations after a year. Then in 2019, we came back with a very different strategy and chose Ludo – to learn something out of it and then chalk out our strategies for other games,” says Square Enix’ product marketing senior manager Cabin George.

The Square Enix experience is backed up by the findings of gaming market experts Esse N Videri (ENV) Media in their analytic publication Target Audience: India. The researchers observe that “…offering local content becomes the new norm in online and mobile gaming” and that the scene is dominated by “Indian themed mobile-centered games.” Thus, operators of Pure Win Casino and other gaming websites are advised to rely “on traditional desi games as a driving force for the whole platform”.

Further evidence is provided by a look at search volumes for the past five years where searches for online roulette real money in India are drastically outperformed by queries related to the traditional game of Rummy. Slot games, a typical western casino product, come out with the lowest results.

Technology is the Link

Gameberry Labs was established in 2017 and now its two Ludo games boost more than 6 million active users per day in 15 different countries. Company co-founder Afsar Ahmad comments that the sheer number of available game engines such as Unreal and Unity stands behind the booming mobile game development in India.

“They make it easier for developers to build the gameplay aspect – how it will play on the phone – after which it’s about art, animation and design, and getting them to work seamlessly in the multiplayer format,” says Ahmad.

Rajan Navani from JetSynthesys stresses the importance of backend engineering talking about the years of work invested by the company’s 200-engineer team. “If you want the best user experience, you not only need content, but also the seamless tech that goes along with it. The architecture, programming, product design, testing, all require deep tech understanding,” Navani points out.

Some companies are much smaller like Mumbai’s GameNagri Studios which launched a mobile Ludo game one year ago. “We are an indie studio with just eight people, and we had to build network capabilities because users wanted multiplayer options. To build multiplayer functions that aren’t buggy is very difficult,” says co-founder and CEO Siddharth Mishra.

15 simple diets and fitness tips you should know

13/10/2021/12:20:pm
Kabul: These days Navratri (Navratri 2021) is celebrated in Kabul, the capital of Afghanistan. There the whole atmosphere has become devotional due to Jagran...

Amitabh Bachchan’s voice can be heard on Alexa soon