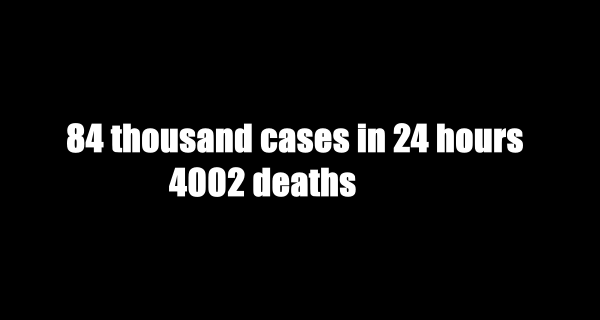 New Delhi: The effect of the second wave of Corona is now gradually decreasing. The number of corona-infected patients has been less than 1 lakh for the fifth consecutive day. In the midst of decreasing cases of the corona, it is being reiterated again and again that the danger still remains. According to the Ministry of Health, if the corona guidelines are not followed, then these figures can increase again. Talking about the last 24 hours, 84 thousand 332 new cases of corona infection were reported in the country, while 4002 patients lost their lives. The special thing is that after 74 days in the country, so few cases of corona infection have come in one day. After the arrival of new cases of the corona, now the total number of infected patients in the country has increased to 2 crores 93 lakh 59 thousand 155.

On Friday, 11,766 new cases of Covid-19 were reported in Maharashtra, while a total of 2213 people died. According to the Health Department, the total number of infected people has increased to 58,87,853 and the death toll to 1,06,367 with new cases. The state government has increased the number of dead after examining the Covid-19 test and other data in the laboratory. However, 406 patients of Kovid-19 have died in the last 24 hours.

238 new cases of the corona were reported in the capital Delhi
On Friday, 238 new cases of coronavirus infection were reported in Delhi, which is the lowest number of daily cases reported in the last three months. According to the data released by the Health Department, 24 more patients died due to the epidemic and the infection rate has come down to 0.31 percent. According to the Health Department, 24,772 patients have died due to Kovid-19 in Delhi so far.

74 more patients die of corona infection in UP
On Friday, 74 more infected people died of coronavirus infection in Uttar Pradesh while 619 new patients were found. According to the Health Department, after the death of 74 patients in the last 24 hours, the total number of people who died of infection so far has gone up to 21,667. After getting 619 new patients in the same period in the state, so far the total number of infected people has reached 17,01,668. In the last 24 hours in the state, 1,642 patients have gone to their homes after recovering and so far 16,68,874 people have become free from corona infection.

Gone with the Wind removed from HBO Max

11/06/2020/11:35:am
Washington: Hollywood classic film Gone with the Wind was on Wednesday taken off HBO Max following calls for it to be removed from the...

18/04/2021/11:27:am
Yangon (Myanmar): Myanmar's military government on Saturday released more than 23,000 Prisoners, including three political prisoners, on the occasion of the traditional New Year....