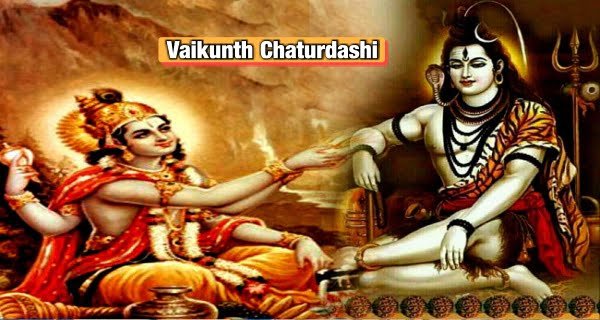 New Delhi: The holy festival of ‘Vaikunth Chaturdashi’ is celebrated on the Chaturdashi of Shukla Paksha of Kartik month. Today i.e. on Wednesday, November 17, the festival of Vaikuntha Chaturdashi will be celebrated. There is a law to worship Lord Shiva and Lord Vishnu on this day. Mass worship is organized on this day in different parts of the country.

It is believed that by worshiping Mahadev and Shri Hari Vishnu on this day, all the sins of a human being are cut away. According to religious texts, during the four months for which the Lord goes into a sleep, Lord Shiva governs the universe.

Lord Vishnu wakes up on the day of ‘Devuthani Ekadashi’ after four months of sleep. After which, on the day of ‘Vaikuntha Chaturdashi’, Lord Shiva again hands over the burden of creation to Lord Vishnu.

It is believed that on this day the gates of Vaikunth Lok are also open. Also, it is said that whoever worships and fasts with full rituals on the day of ‘Vaikuntha Chaturdashi’, after death, goes to Lord Vishnu’s Vaikunth Dham.

Let’s know the auspicious time and method of worship of ‘Vaikuntha Chaturdashi’:

Auspicious time
Chaturdashi Tithi will start at 09:50 am on Wednesday, November 17, and will end on Thursday, November 18, at 12 noon on Chaturthi Tithi.

Worship Method:
On the day of Vaikuntha Chaturdashi, wake up early in the morning and take a vow of fasting after taking bath. Then at night worship Lord Vishnu with 108 lotus flowers. After this worship Lord Shiva. During the worship “Vina ho Haripujan tu kuryad rudrasya charchanam. Vrtha Tasya Bhavetpuja Satyametdvcho Mam. Chant the mantra. On this day Lord Shankar should also be offered only kheer made from Makhana.

Importance
On the day of Vaikuntha Chaturdashi, a person who worships Lord Vishnu with 1000 lotus and his family attains the world of Baikunth. Shradh and Tarpan also have special significance on this day. By observing the fast of Baikunth Chaturdashi, one attains the end of Baikunth Dham. According to religious beliefs, on this day after the war of Mahabharata, Lord Krishna performed Shradh for those killed in it.

10/06/2020/8:31:pm
New Delhi: Air India has started the sale of the tickets for the flights to bring back stranded Indians in the European nations from...

25/12/2020/10:35:am
Beijing: China (China) will suspend all flights to and from the UK. China's Foreign Ministry announced this on Thursday. Several countries have imposed a temporary...

Relief for taxpayers, date of filing of income tax has increased to 30 September