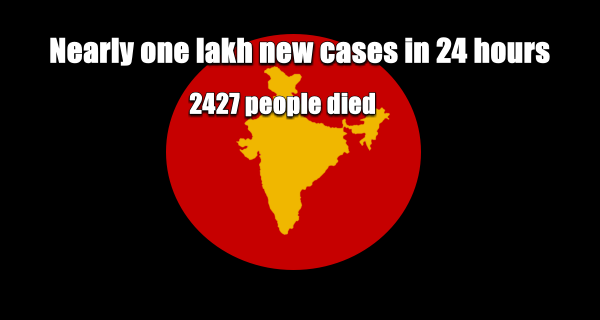 New Delhi: The second wave of Coronavirus In India is slowly weakening in the country. A little more than one lakh new cases of Covid-19 infection were registered here in the last 24 hours. At the same time, 2427 people died, while 1 lakh 74 thousand 399 people were also cured. 61 days after the start of the second wave, there have been so few cases in the country.

According to the Union Ministry of Health and Family Welfare (Mohfw), a drop of 76,190 active cases was recorded on Monday with the number of people recovering in a single day. It was told that the total number of active cases in the country at present is 14,01,609, the number of discharged patients is 2,71,59,180 and the number of dead has gone up to 3,49,186.

After the death of 65 more people from Covid-19 in Punjab, the total number of dead has increased to 15,076 on Sunday, while the death toll has reached 5,79,560 with 1,593 new cases of the infection being reported. This information has been given in a health bulletin. At the same time, after the arrival of 654 new cases of infection in Haryana, the total number of infected people has increased to 7,62,291.

According to the health bulletin of Punjab, the number of patients under treatment in the state was 24,454 on Saturday, which has now increased to 22,160. After recovering from the infection of 3,790 more people, the total number of people who have been cured has gone up to 5,42,324. According to the bulletin of the Health Department of Haryana, after the death of 48 more patients in the state, the death toll has reached 8,712.

According to the bulletin, the number of patients under treatment in the state has gone up to 9,097. So far 7,44,482 people have been cured. Meanwhile, after 74 new cases of infection were reported in the Union Territory of Chandigarh on Sunday, the total number of infected people has increased to 60,659. With the death of four more patients, the death toll has reached 772. The number of patients under treatment is 833.

496 new covid cases found in Uttarakhand, 23 deaths
On Sunday, 496 new Covid cases were found in Uttarakhand and 23 others succumbed to the epidemic while three patients suffering from black fungus also died. According to the bulletin issued by the Health Department here, including the fresh cases, the number of corona virus-infected in the state has so far reached 334024. In the fresh cases, a maximum of 121 Covid patients was found in the Dehradun district while 67 in Haridwar, 61 in Pithoragarh, 54 in Tehri Garhwal, and 26 in Udham Singh Nagar.
It has been said in the bulletin that 16 out of 23 deaths in the state have occurred in Dehradun district alone and so far a total of 6699 people have lost their lives due to the epidemic in the state. The number of cases under treatment in the state is 16125 while 305239 patients have become healthy so far.

Meanwhile, 20 more cases of black fungus or mucormycosis were reported in the state while three patients died. So far 299 patients suffering from this disease have been found in the state, out of which 47 have died.

735 new cases of coronavirus in Madhya Pradesh 42 people died
735 new cases of coronavirus infection were reported in Madhya Pradesh on Sunday and with this, the total number of people found infected with this virus in the state so far reached 7,85,196. An official gave this information. The official said that 42 more persons have died in the state due to this disease in the last 24 hours. So far, the death toll in the state has reached 8,337. He said that out of 52 districts of the state, in two districts Alirajpur and Burhanpur, not a single new corona-infected person was found in the last 24 hours.

848 cases of Covid-19 in Gujarat, 12 died
On Sunday, 848 new patients of corona virus were confirmed in Gujarat, after which the total cases reached 8,16,234 while after the death of 12 patients, the death toll has gone up to 9933. An official said that after recovering from the infection of 2915 more patients, the number of infection-free patients has reached 7,88,293.

He told that 191 cases were reported in Vadodara, 141 in Surat, 134 in Ahmedabad, 56 in Junagadh, 49 in Rajkot, and 31 in Jamnagar. According to the official, three infected have died in Ahmedabad while two patients have died in Surat. He told that 18,008 patients are undergoing treatment for infection in Gujarat, out of which 371 patients are in critical condition. A release said that 2,26,335 people have been vaccinated on Sunday.

Iraq court issued arrest warrant against Trump in connection with the murder of General...

07/01/2021/9:18:pm
Baghdad: An Iraq court on Thursday issued an arrest warrant against US President Donald Trump for the killing of an Iranian general and an...

26/11/2020/11:12:am
Beijing: Chinese President Xi Jinping on Wednesday congratulated newly elected US President Joe Biden on winning the presidential election and hoped that the two...