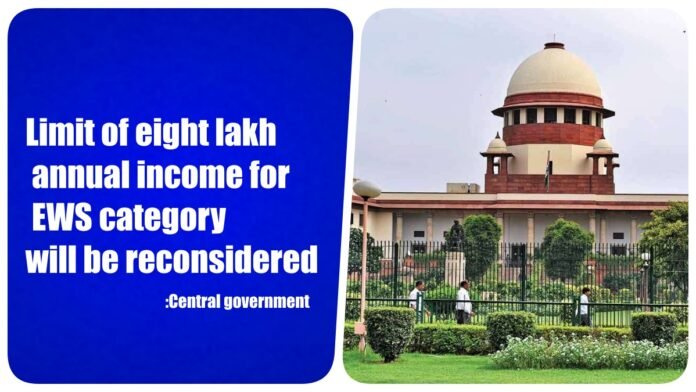 Solicitor General Tushar Mehta told a bench of Justices DY Chandrachud, Surya Kant, and Vikram Nath that a committee would be constituted to fix the criteria for determining the EWS category and the committee would take four weeks to do the same. . Mehta said as per the assurance given earlier in the court, the NEET (PG) counseling is further postponed for four weeks.

The apex court is hearing petitions of students seeking 27 percent reservation for Other Backward Classes (OBCs) and 10 percent for EWS in admission to medical courses in the National Eligibility-cum-Entrance Test (NEET-PG) for the current academic year. The July 29 notice of the Center and the Medical Counseling Committee to provide reservation has been challenged.

Justice Surya Kant said that EWS reservation is a very efficient and progressive type of reservation and all states should support the Centre’s efforts in this endeavor. The bench said the only question is whether the classification should be done in a scientific manner and it appreciates that the Center has decided to revisit the criteria already laid down.

Senior advocate Arvind Datar, appearing for the petitioners (students), submitted that since a lot of time has elapsed, the Center should withdraw the implementation of EWS reservation for the next academic year and start counseling for the current year.

The bench agreed with Datar’s submissions and asked Mehta whether he can withdraw the implementation of the constitutional amendment by the next academic year and start counseling for the current academic year. To this, Mehta said that the government has decided to implement the 103rd Constitutional Amendment for the current academic year and it would not be appropriate to withdraw it. He said he would inform the court if the grading process is done before four weeks.

The bench told Datar that the time of four weeks was not unreasonable and it did not want the government to do it in haste or else the norms would be set unscientific and haphazardly.

Advocate Shashank Ratnu, appearing for OBC candidates, requested that the reservation application of OBC students should not be rejected as the Center is planning to revisit the criteria for the EWS category. To this, the bench said that it has not said anything about OBC students and is not disposing of the petition. After this, the court heard Mehta’s arguments and fixed January 6 for the next hearing on the matter.

31/07/2020/10:29:am
New Delhi: India said on Thursday that it is committed to protecting the life of Kulbhushan Jadhav, who is facing death sentence in Pakistan....

10/06/2020/8:31:pm
New Delhi: Air India has started the sale of the tickets for the flights to bring back stranded Indians in the European nations from...

20/10/2021/1:24:pm
Islamabad: Pakistani media has expressed concern over the current situation in the country, terming Prime Minister Imran Khan as a leader who sells dreams....