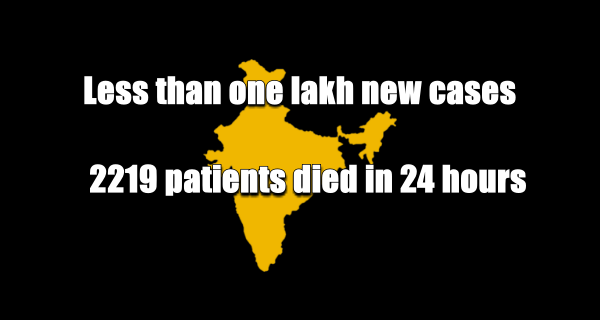 New Delhi: The pace of vaccination in the country has increased, but the speed of Coronavirus cases in India seems to be slowing down. For the second consecutive day on Tuesday, the number of new corona infected was less than one lakh. In the last 24 hours, the corona report of 92 thousand 596 people came positive. During this, 2219 people lost their lives. At the same time, 1 lakh 62 thousand 664 infected returned home after recovering. A decrease of 71 thousand 792 was recorded in the active case (Covid-19 Active Case) on the previous day.
According to the information released by the Ministry of Health, so far 2 crore 90 lakh 89 thousand 69 of corona have been infected in the country. Of these, 2 crore 75 lakh 4 thousand 126 people have been cured so far. So far 3 lakh 53 thousand 528 people have died due to this virus. Presently 12 lakh 31 thousand 415 patients are undergoing treatment.

So far 23.61 crore vaccine doses have been administered in the country
According to the data of the Union Ministry of Health and Family Welfare (MoHFW), 23 crore 61 lakh 98 thousand 726 doses of Corona Vaccine have been given till 8 am on June 8 across the country. Of these, 18 crore 95 lakh 95 thousand 747 people have been given the first dose of the vaccine, while 4 crore 66 lakh 2 thousand 979 people have got both doses.

01/03/2021/8:28:pm
Washington: Based on an analysis of photographs of recent construction in the Chinese missiles launched from a satellite, a US expert said that China...

19/01/2021/11:44:pm
Sacramento (US): An officer under the Sheriff of California was killed and another officer was injured in a Firing incident in the US. The...