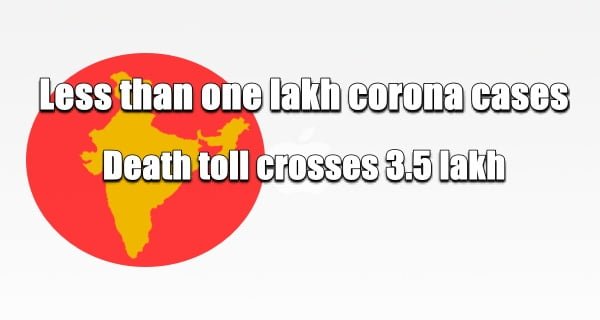 New Delhi: The havoc of the second wave of Coronavirus cases in India has started decreasing. After 63 days, less than one lakh corona cases were registered in the country in 24 hours. On Tuesday, 86 thousand 498 people across the country became corona positive. Earlier on April 5, 96,563 people were found to be corona infected. On the previous day, 1 lakh 82 thousand 282 people recovered from corona, while 2123 infected people lost their lives.
According to the latest data of the Ministry of Health, so far 2 crores 89 lakh 96 thousand 473 people have been corona infected in the country. Out of these, 2 crores 73 lakh 41 thousand 462 people have been discharged. So far 3 lakh 51 thousand 309 people have lost their lives. At present, there are 13 lakh 3 thousand 702 active cases in the country. Now the daily positivity rate in the country has gone up to 6.34 percent.

231 corona cases found in Delhi
On Monday, 231 people were found corona positive in Delhi. 876 people were cured and 36 died. So far 14.29 lakh people have come under the grip of infection. Of these, 13.99 lakh people have been cured, while 24,627 patients have died. Presently 5,208 patients are undergoing treatment.

Corona’s speed decreased in Gujarat too
On Monday, 778 people were found corona positive in the state. 2,613 people were cured and 11 died. So far 8.17 lakh people have come under the grip of infection. Of these, 7.90 lakh people have been cured, while 9,944 patients have died. 16,162 people are being treated here.

How many vaccines have been administered in the country so far?
In the last 24 hours, 13 lakh 90 thousand 916 doses of corona virus vaccine have been applied in the country, after which the total vaccination figure has gone up to 23 crore 61 lakh 98 thousand 726. Indian Council of Medical Research (ICMR) has informed that so far 36 crore 82 lakh 07 thousand 596 sample tests of corona have been done in the country. On June 7, a total of 18 lakh 73 thousand 485 samples were tested.

Now private trains will run in the country! Central government asked for applications

01/07/2020/10:26:pm
New Delhi: The central government is planning to run Passenger Trains in private sector participation. For this, the Ministry of Railways has asked for...

Doctors raise questions on Bharat Biotech’s Covaxine, refused to get it installed

16/01/2021/10:18:pm
New Delhi: The elimination of the Corona Virus has started in the country. Prime Minister Narendra Modi has started the largest corona vaccination campaign...