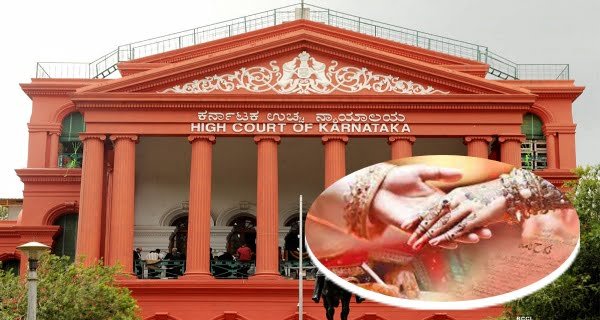 Bangalore: The Karnataka High Court has observed that Muslim Nikah is a contract that has multiple meanings, it is not a sacrament like a Hindu marriage and is void of certain rights and obligations arising out of its dissolution. cannot be removed. The matter pertains to a petition by Ejazur Rahman (52) at Bhuvaneshwari Nagar, Bengaluru, seeking quashing of the order of the First Additional Principal Judge, a family court in Bengaluru dated August 12, 2011. Rahman divorced his wife Saira Banu on November 25, 1991, after saying the word ‘talaq’ a few months after his marriage with ‘Mehar’ of five thousand rupees.

After this divorce, Rahman married a second time, making him the father of a child. Bano then filed a civil suit on August 24, 2002, seeking maintenance. The family court had ordered that the plaintiff be entitled to monthly maintenance at the rate of Rs 3,000 from the date of suit till his death or his remarriage or till the death of the defendant. Dismissing the petition with a fine of Rs 25,000, Justice Krishna S Dixit in his order on October 7 said, “Nikah is a contract which has many meanings, it is not a sacrament like a Hindu marriage. This is true.”

Justice Dixit elaborated that Muslim marriage is not a sacrament and it cannot run away from certain obligations and rights arising after its termination. “Even after the marriage bond is broken through a divorce, in fact, all the obligations and duties of the parties are not completely abated,” the bench said. He said that among Muslims, Nikah takes place with a contract and it eventually attains the status it usually holds in other communities. The court said, “This situation gives rise to certain justifiable obligations. They are obligations born out of contract.” The court said that new obligations may also arise under the law. One of them is the circumstantial duty of a person to pay maintenance to his ex-wife who has become incapable of maintaining herself due to divorce.

Justice Dixit cited verses from Surah Al-Baqarah in the Quran to say that it is the moral and religious duty of a true Muslim to provide maintenance to his destitute ex-wife. The court said that a Muslim ex-wife has a right to maintenance subject to fulfillment of certain conditions and this is indisputable. Justice Dixit observed that the ‘mehar’ is insufficiently fixed and the bride’s side does not have equal bargaining power.

25/10/2020/9:38:pm
Rangoon: To encircle India, China has been investing heavily in neighboring countries for the last several years. On Sri Lanka, China's debt increased so...

Important things we need to know about the Glasgow Climate Agreement

15/08/2021/2:07:pm
Beirut: At least 20 people were killed and several others were injured when a fuel tanker truck exploded in northern Lebanon on Sunday morning....