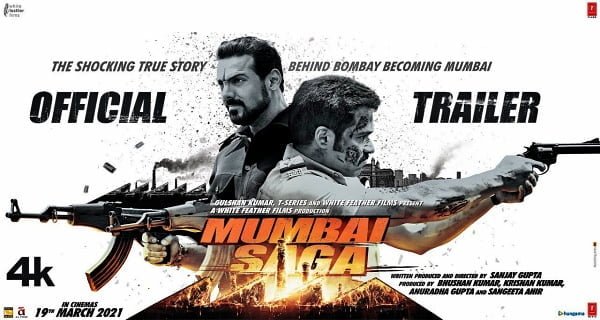 Mumbai: The economy suffered a lot in 2020 due to Coronavirus across the country. Along with many sectors of the economy, the film industry also had to bear the loss of thousands of crores. Since March this year, the second wave of coronavirus is increasing rapidly in the country.

This second wave has also severely affected Maharashtra. Due to this, shooting of films and TV shows has been stopped in the state. Producers are no longer releasing their films in theaters. Producers are releasing their films on online streaming platforms. Directed by Sanjay Gupta, the film has been released in theaters on March 19. John Abraham and Emraan Hashmi have worked together for the first time in this upcoming action thriller.

Amazon Prime Video announced the digital premiere of the action drama ‘Mumbai Saga’ on Monday. Users who subscribe to this platform in India and in 240 countries and regions can stream this film from now on.

Apart from these two actors, the film also stars Kajal Aggarwal, Prateik Babbar, Sunil Shetty, Jackie Shroff, Rohit Roy, Anjana Sukhani and Gulshan Grover. In the film, John is in the role of a gangster who aspires to rule Bombay while Emraan Hashmi is in the role of a cop who wants to kill John as the person who killed John will get a prize money of Rs 10 crore.
‘Mumbai Saga’ was released in the theater on 19 March. During this time the film was allowed to be shown in the theater with some restrictions, but due to the restrictions, the film business was severely affected. The movie ‘Mumbai Saga’ on the theater has so far earned 12 crore 82 lakh rupees.

Google’s new feature for Android users! Who will tell who is making the call...

10/09/2020/12:08:am
Google has launched a new feature 'Verified Calls' for Android users. The company has launched this feature in 5 countries, including India. With...

The biggest drop in gold and silver prices this month

18/08/2020/10:14:pm
New Delhi: The collegium of the Supreme Court has approved the appointment of six lawyers as judges of the Delhi High Court. The collegium...

18/09/2020/10:23:pm
New Delhi: After withdrawing from the Google Play Store for a few hours, the mobile wallet application Paytm Android App is back on the...