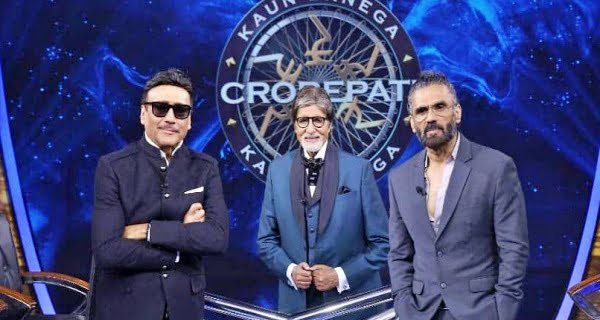 Mumbai: Jackie Shroff and Suniel Shetty are going to be seen as special guests in the latest episode of Kaun Banega Crorepati 13. Where both will be seen playing quiz with Bollywood star Big B and also both will be seen talking about their friendship and their work. Both the stars have been in the headlines for their films as well as their friendship in Bollywood. Meanwhile, a new promo has been shared by the channel, in which Jackie Shroff is seen sharing an anecdote related to Amitabh Bachchan and his two children Shweta and Abhishek.

In this promo, Jackie Shroff is telling how one of his wishes remained unfulfilled because of Amitabh Bachchan’s children Shweta and Abhishek Bachchan. Jackie revealed that both he and Amitabh were shooting for a film in Chennai. As soon as he came to know about the existence of Amitabh Bachchan, he decided to approach Big B for his autograph.

On the way, Jackie saw Amitabh with his staff and children Abhishek and Shweta coming to him. Jackie Shroff says to Amitabh Bachchan- “Baby Shweta and Chhotu Abhishek came with your boy and the boy said, ‘These Bachche are Saab ke children’, want to get your autograph’.

Jackie further says- ‘I said- Sir, I wanted Bachchan sir’s autograph, his children are taking my autograph. What is the matter.’ On hearing this, Big B laughed out loud. Along with this, Jackie Shroff also revealed where his famous word ‘Bhidu’ came from. He told that this word is also inspired by Big B somewhere.

When Big B asked Jackie where did this ‘Bhidu’ come from. So in response, Jackie says- ‘Well, first of all, it was because of the region in which I was born and grew up. But, it also came because of you. It was you, we came later.’ Earlier, this quiz-based reality show of Big B was attended by Virender Sehwag and Sourav Ganguly.

26/03/2021/9:14:pm
Islamabad: Pakistan on Friday successfully tested the Shaheen 1A (Ballistic Missile) Shaheen 1A, a surface-to-surface ballistic missile capable of carrying a nuclear weapon. The...

Big B, linked to RBI awareness campaign, will alert bank customers to fraud

Even after taking two doses of vaccination, the collector became corona infected

12/03/2021/4:39:pm
Raipur: Collector of Janjgir-Champa district in Chhattisgarh, Yashwant Kumar has been found corona positive. Even after taking both doses of the corona vaccine, there...

Xiaomi’s powerful smartphone with 6000mAh battery is getting cheaper, will get special display and...