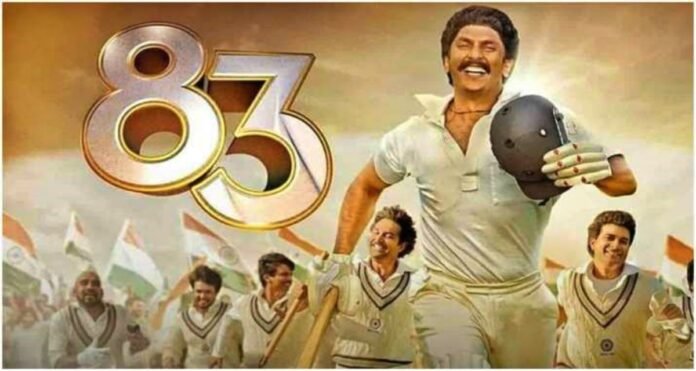 Mumbai: The latest song ‘Lehra Do’ from Ranveer Singh starrer 83 has been released. The makers have released the patriotic track along with a video that will make you feel inspired by Arijit Singh’s melodious and soulful voice.

83 will feature Ranveer Singh in the role of Kapil Dev which revolves around India’s historic 1983 World Cup victory. The song itself is an emotional ride that will take you through the emotions of Team India and their journey through the ’83 Cricket World Cup.

Ever since the trailer releases a few days back, the film has been the talk of the town with over 75 million views in less than a week. Ranveer Singh is playing the character of Kapil Dev in the film. Apart from this, Tahir Raj Bhasin, Jeeva, Saqib Saleem, Jatin Sarna, Chirag Patil, Dinkar Sharma, Nishant Dahiya, Hardy Sandhu, Sahil Khattar, Ammi Virk, Adinath Kothare, Dhairya Karva, R Badri, and Pankaj Tripathi will also be seen in the film. Deepika Padukone will be seen playing the role of Kapil Dev’s wife Romi in this film.

Amazon Prime Video release trailer of ‘Breathe: Into The Shadows

01/07/2020/10:18:pm
Delhi: Amazon Prime Video on Wednesday released the trailer for the highly anticipated all-new Amazon Original Series ‘Breathe: Into The Shadows. Created and produced by...

23/07/2021/12:14:pm
Bengaluru:  Bulk discounts and attractive deals on a wide range of business relevant products on Amazon Business.Wide range of office products from categories like smartphones,...