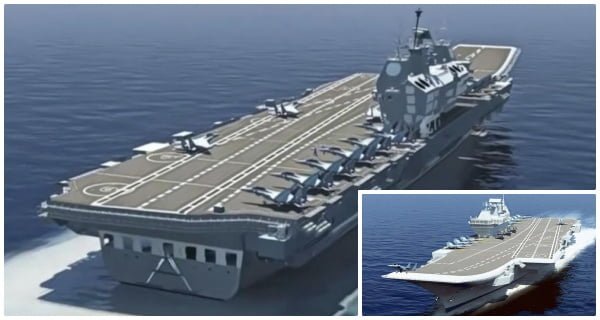 New Delhi: The Indian indigenous Aircraft Carrier will soon join the Navy to rein in China’s rift in the sea. Indian Navy’s Carrier Battle Group is stationed in the Arabian Sea to deal with Pakistan, but to maintain its strength on the Bay of Bengal and the Indian Ocean area, another Carrier Battle Group will be deployed soon. In this regard, Defense Minister Rajnath Singh reached Kochi to review the progress of construction of India’s first indigenous aircraft carrier IAC-1.

After the formation of this aircraft carrier, India will be included in the few countries in the world that have the technology to build aircraft carriers. This aircraft carrier harbor trials and basin trials were completed at the Kochi shipping yard only last year. That is, before sea trials, all the equipment in the ship is checked whether they are working properly or not.

Soon IAC-1 will come out of sea trial soon
Due to Corona, there was a slight delay in its sea trial, but it is believed that soon IAC-1 will come out of the sea trial soon. The indigenous aircraft carrier will be named after the retired aircraft INS Vikrant from the Indian Navy. Talking about the merits of this aircraft carrier, its total length is 262 meters. Its construction started in February 2009 at the Cochin Shipyard.

26 fighter aircraft and 10 helicopters can be kept in this carrier. The Indian Navy currently has only MiG-29K fighters that can fly from aircraft carriers. Apart from this, the Navy version of Swadesh Tejas is also being prepared for this.

16/07/2020/9:55:pm
New Delhi: The biggest cyber attack on social media platform Twitter has happened so far. In this, Twitter accounts of many American celebrities have...

Hatred for Muslims, whole family was trampled by the truck, 9-year-old child serious, 4...

Protests over the making of videos/photographs of policemen in France

30/11/2020/10:18:pm
Paris: Protests have erupted over the proposed new law relating to the making of police and video of police officers in France as civil...

01/10/2020/12:40:am
Singapore:  Cube Highways III, a portfolio company of I Squared Capital through its ISQ Global Infrastructure Fund II, has acquired 100 percent of KNR Walayar...