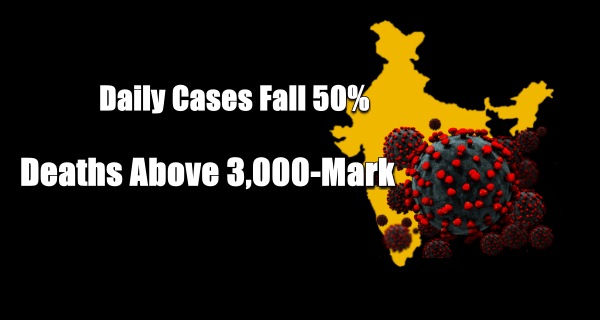 The 50 percent reduction in weekly cases during the second wave took half the time as compared to the first wave in the country, a Times of India report said.

During the first wave in September, average daily cases had peaked at 93,735 on September 17. The average cases had reduced to half six weeks later on October 30.

However, the daily death toll didn’t follow the downward curve yet. The seven-day average of daily deaths hit a high of 4,040 on May 16. The count currently stands at 3,324. The daily deaths are yet to drop below 3,000 mark.

Meanwhile, the difference between new cases reported in the last 7 days and the preceding 7 days saw a dip of 25 percent.

03/04/2021/2:53:pm
Mumbai: TV actress Shweta Tiwari has been in the limelight for the past few days for her stylish avatar. Shweta's look is changing rapidly....