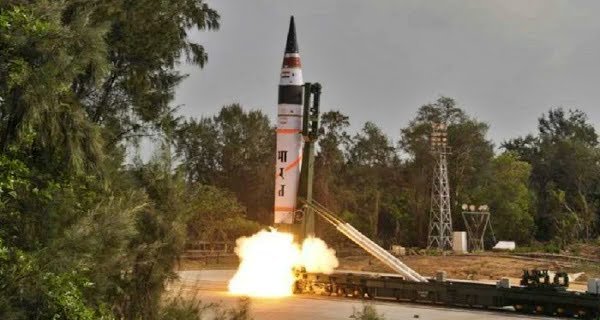 New Delhi: India successfully test-fired Surface to Surface Ballistic Missile Agni-5. This test was done on Wednesday evening at 7.50 pm from APJ Abdul Kalam Island. The specialty of this missile is that it is the country’s first intercontinental ballistic missile and has a range of 5000 km. So far more than 7 different trials of this missile have been done. Former DRDO scientist believes that Agni 5 is a quantum jump in missile technology.

Many cities of China had come under the JD of the Indian missile in the year 2012 itself when India successfully tested the 5000 km strike Agni Missile 5 and since then the accuracy and firepower of the Agni missile by carrying out different tests. Capacity is being further improved. In the same sequence, the Inter-Continental Ballistic Missile, Agni-5 has been successfully tested on Wednesday.

Agni 5 is 100% indigenous
Agni 5 The complete technology, propulsion system, rocket, advanced navigation of this missile is 100% indigenous. Agni 5 is a platform with a range of 5000 km which is fully capable of carrying Pramanu weapons. Due to this, the deterrence power of India has been increased tremendously. It is said that if you make a mark of 5000 km from any place on the map of India and fire it, then it can kill accurately.

From India, this can prove to be the biggest headache for China, which is why China has also expressed its displeasure over this test. In the coming days, if the capacity is to be increased by killing it, then that can also be increased. It is a ballistic missile and it has been equipped with such technology that once the target is programmed, it will destroy it and release it. Due to the technology, it has been programmed such that once launched, no country can technically tamper with the navigation or system through the Internet.

If we talk about its speed, then it can accelerate towards its target 24 times faster than the speed of sound. The Agni-5 missile weighs about 50 tonnes and its length is about 17 meters while the thickness is about 2 meters. It is capable of carrying a warhead of around 1500 kg. The first test of this surface-to-surface missile was done in 2012. India has already operationally deployed Agni-1,2,3 missiles.

It is believed that these three missiles have been designed keeping in mind the threats arising from Pakistan. Whereas Agni-5 has been specially designed for the challenges being faced by China. Agni-5 has reached every area of ​​China.

The United States has backed sanctions against Chinese and Russian companies over Iran’s missile...

19/09/2021/10:35:pm
Kondagaon: A painful road accident happened on Sunday in the Kondagaon Road Accident district of Chhattisgarh. On Sunday, there was a fierce collision of...

31/07/2020/12:34:am
The Indian government has announced a new education policy in the country after nearly 34 years and has also promised to spend six percent...