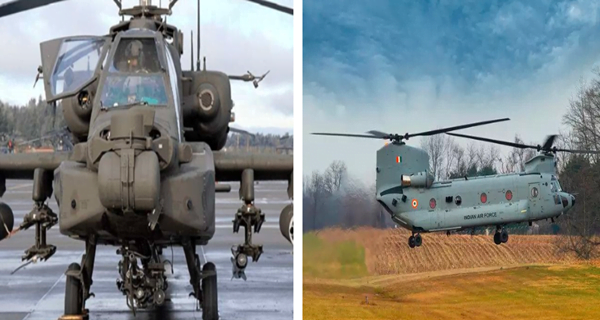 New Delhi: The strength of the Indian Air Force increased during amid tensions with China, with 22 Apache and 15 Chinook helicopters handed over to India. Now the Air Force is also equipped with helicopters which are also used by countries like America. Apart from India, 16 other countries use Apache helicopters. India has its most advanced version AH-64E. The US military also uses it. It features navigation, advanced weaponry capability, a new communication system, open system architecture.

The armies of 20 countries worldwide employ the services of Chinook chopper. It is the world’s most reliable and capable heavy lift helicopter. It has been used for 50 years. Even at high altitudes or hot places, it can fly successfully and can carry out its work. It consists of modern airframe, common avionics architecture system cockpit and digital automatic control system. It is an effective helicopter to increase the strength of the army.

Apache is known for its firepower

There is an Apache fighter helicopter flying at a speed of over 350 km / h. It was included in the Air Force fleet only last year. Apache helicopter is famous all over the world for its firepower. It has a modern target acquisition design system which also provides weather information. It also has the ability to see in Andher which is very helpful for the army. It is also capable of flying over the sea and operating.

With the capability and technology of the Chinook chopper, the Indian Air Force can easily carry out its operations. It has the potential to make the campaign successful in every season.

Harsimrat Kaur Badal said – Sad that my voice raised for farmers is not...

Maruti Suzuki increased the prices of all its cars, know when the new price...

Massive fire broke out in bogies of Durg Express train in...

Omicron’s ‘stealth variant’ wreaking havoc in the world, will it bother...