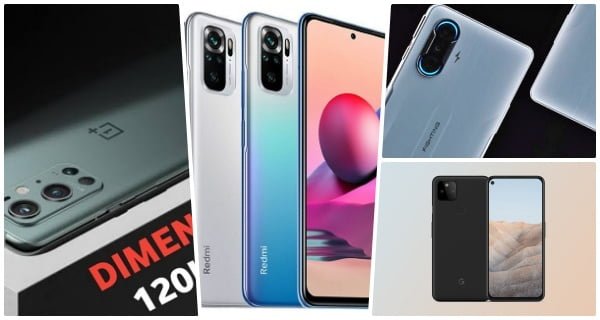 Amidst the monsoon season,India will see 5 new smartphones launching in July . July will see some great devices being unveiled. From flagships to mid-range phones.

OnePlus Nord 2
OnePlus Nord 2 latest renders leaked the first look. Shared by tipster Steve Hemmerstoffe (OnLeaks) in association with 91Mobiles, the leaked OnePlus Nord 2 image revealed a hole-punch cutout display and a similar OnePlus 9 series inspired camera bump. It also revealed narrow bezels on three sides with a thin chin, a volume rocker is on the left, power button on the right with an alert slider. OnePlus Nord 2 specs recently were spotted on the AI Benchmark hinting at a July launch.

Redmi 10 Series
Redmi 10 series is coming to India. The company teased the launch with a special teaser calling it Redmi Revolution. The tagline says: brace yourselves for the #RedmiRevolution, clearly hinting at Redmi 10 series. The series has already been leaked on earlier occasions, and the latest teaser hints at a July launch in the country. The tweet also mentions a special hashtag, #10on10, so be sure that the upcoming Redmi phones will be from Redmi 10 series in July.

Redmi 10 series may include four to five smartphones just as last year, all will be inspired heavily by Redmi Note 10 series lineup at a budget pricing of around Rs 10,000. The upcoming Redmi 10 series will primarily include four phones, though the lineup may extend further given Xiaomi is known often to expand a particular series with multiple handsets.

Pixel 5a: July / August
Google Pixel 5a launch date has been tipped to happen in August. Pixel 5a sale is said to start in the same month. The leaked report revealed Pixel 5a launch will happen in August and Pixel 5a India availability is expected in the same month. The upcoming Pixel mid-ranger was previously being expected in June, but the upcoming Google phone is now said to arrive late, in August, as per popular analyst Mark Gurman with Bloomberg.

Google will follow the same strategy with Pixel 5a as the previous generation Pixel 4a in 2021, no fancy features, just a budget pricing with some really good specs on-board.

12/10/2020/9:54:pm
Islamabad: There is political outrage in Pakistan these days. The entire opposition has united against Imran Khan and his allied Pakistani army. Not only...

01/02/2021/8:58:pm
Washington: There has been a discussion between the governments of India and the United States (India, US) about the F-15EX Fighter Jets, and information...

Why immediate hearing on Arnab Goswami’s bail plea despite being on leave?

12/11/2020/10:13:am
New Delhi: A two-judge bench of the Supreme Court has granted interim bail to three people, including Arnab Goswami, editor-in-chief of Republic TV, after...