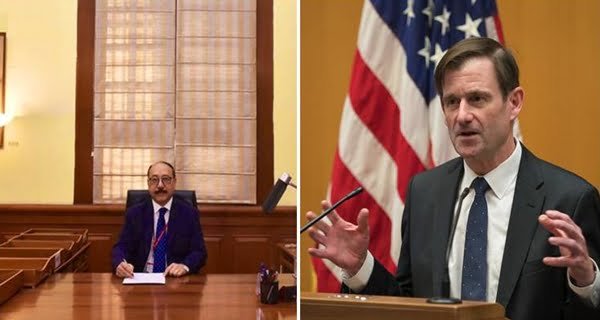 New Delhi: After the Trump administration asked foreign students to leave the US if their universities hold online classes, India and the US on Monday discussed ways to further enhance mutually beneficial trade and people-to-people ties, including through visa facilitation for students and professionals.

Foreign Secretary Harsh Vardhan Shringla and the US Under Secretary of State for Political Affairs David Hale held virtual Foreign Office Consultations on Tuesday and reviewed the entire gamut of engagements under the India-US Comprehensive Global Strategic Partnership, including political, economic, commercial, regional and international cooperation.

They exchanged views on a number of regional and global issues of shared interest.

In a notification issued Monday, the US Immigration and Customs Enforcement (ICE) said,The U.S. Department of State will not issue visas to students enrolled in schools and/or programs that are fully online for the fall semester nor will U.S. Customs and Border Protection permit these students to enter the United States.

The ICE also said that the students who are presently residing in the US and are enrolled in various programmes with such universities must depart the country or take other measures, such as transferring to a school with in-person instruction to remain in lawful status or potentially face immigration consequences including, but not limited to, the initiation of removal proceedings.

On 23 June, the Trump administration had temporarily suspended non-immigrant visas, such as the H1B visas, until December

30/06/2022/9:35:am
Srinagar: After nearly three years, the Amarnath Yatra will begin today to visit Baba Barfani in the hills of South Kashmir. This time the...

29/01/2023/10:56:am
Join Jaya and Yogi on their journey to retrace past relationships that end up in the most eventful, strange and yet the most crazy...

11/06/2021/9:59:am
Moscow: Russian authorities have fined Facebook and Telegram apps for their alleged failure to remove banned content. The move can be considered as part...

09/05/2022/8:38:pm
New Delhi: Sri Lankan Prime Minister Mahinda Rajapaksa on Monday resigned from his post amid a severe economic crisis and emergency in the country....

Imran Khan gets a shock, close is removed from the post...

118-year-old Sister Andre of France is the oldest lady on the...

2 important matches in T20 World Cup on Friday, Australia in...