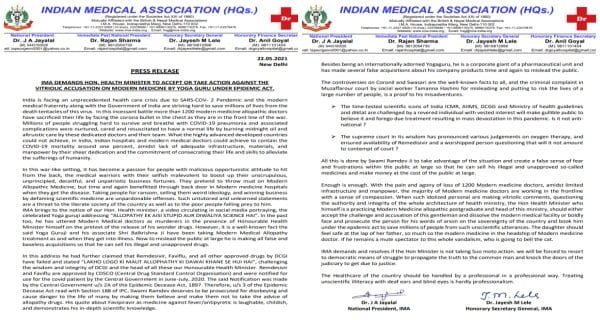 New Delhi: The Indian Medical Association (IMA) has written a letter to Prime Minister Narendra Modi demanding that the government’s protocol for the treatment of Covid-19 be challenged and vaccination ( Yoga guru Ramdev should be immediately booked on charges of treason for running a campaign with alleged misinformation on vaccination.

The leading organization of doctors treating with modern medical practice has also sent a defamation notice to Ramdev for the allegedly insulting statement against allopathy. The union has asked him to apologize within 15 days. He has said that if this does not happen, he will demand compensation of Rs 1,000 crore.

In a letter to Modi, the IMA said it was “very gratifying” that only 0.06 percent of people in the country who had received both doses of the vaccine had a “mild” infection with the coronavirus and those who had been vaccinated had very serious lung infections ‘Very rare’.

The Physicians’ Association wrote in its letter, “It is well established that vaccination saves our people and country from the devastating effects of serious infections.” On this occasion, we would like to bring to your notice with great sadness that a video circulating on social media is claiming that even after taking both doses of the vaccine, 10,000 doctors died and due to taking allopathic medicines Millions of people have died, as stated by Mr. Ramdev, owner of Patanjali Products. ” Etc.

“We, the representatives of modern medical professionals, would like to say that we follow the guidelines and protocols issued by the Ministry of Health through ICMR or National Workforce in the treatment of millions of people coming to the hospitals. If anyone is claiming that allopathic medicines have killed people, it is an attempt to challenge the ministry that issued us the protocol for treatment. ”

The IMA said that to date and according to its registry, 753 doctors had died from the infection in the first wave of coronavirus and 513 doctors lost their lives in the second wave. He said that no one was vaccinated against the coronavirus in the first wave and most of the people who lost their lives in the second wave could not be vaccinated due to various reasons.

“Now, even after fraudulently taking both doses of the vaccine, the talk of 10,000 deaths is a deliberate attempt to thwart efforts to make the vaccine available to the public and must be stopped immediately,” the IMA said. He also said that IMA respects all systems of medicine, especially the Indian system of Ayurvedic medicines.

The IMA writes, “We are not against any medicine being promoted by the Ministry and we gladly share medicines enhanced by the Ministry of AYUSH at most of our public health treatment centers. We opposed some drugs without the approval of the ministry. ”

The organization requested the Prime Minister, “We urge you to take appropriate action against those who spread the message of fear over-vaccination and challenge the Government of India’s treatment protocols for the vested interests of our company’s products.” In our view, this is clearly a case of treason and such people should be immediately prosecuted on charges of treason without any delay. ”

Ramdev had withdrawn his statement released in the viral video on Sunday. He can be heard questioning some of the drugs used to treat coronavirus infections and saying that “millions of people have died as a result of taking allopathic medicines to treat Covid-19.”

This statement was strongly opposed by allopathic doctors and the IMA. Union Health Minister Harshvardhan had asked Ramdev to withdraw this “extremely unfortunate” statement. A day later, Ramdev asked IMA 25 questions in an open letter on his Twitter handle. In it, he asked whether patients with high blood pressure and type-1 and type 2 diabetes could get permanent treatment from allopathy.

14/05/2021/8:47:pm
Mumbai: The Indian Meteorological Department (IMD) issued a warning on Thursday, saying that the low-pressure area over the Arabian Sea could turn into a...